Anti-gun Bill to Have Hearing on Tuesday

The New Hampshire “Bloomberg faction” has made no secret of their strategy:  If they can’t immediately ban most guns, as Bloomberg’s New York has, at least they will pass a “placeholder bill” which will take away as many gun rights as New Hampshire politics will allow.

The anti-gun bill they have selected is Senate Bill 244, sponsored by anti-gun state Senator David Watters.

The Watters bill would require that the names of large numbers of Granite Staters be sent to the FBI gun-ban blacklist — the NICS system.

Up until now, New Hampshire has been loath to send these names to NICS because of privacy concerns and potential violations of federal privacy regulations under the Health Insurance Portability and Acccountability Act (HIPAA).  A recent article on HIPAA by GOA’s General Counsel can be seen here.

Senate Bill 244 would set aside any personal privacy considerations.

Aside from that, Senate Bill 244 would strip law-abiding Granite Staters of their constitutional rights, without due process, for petty reasons, such as the appointment of a guardian under RSA 464-A.

Our General Counsel has personal experience with RSA 464-A, when his mother had all of her rights taken away in a “star chamber” ex parte proceeding in the basement of Concord Hospital without the benefit of counsel, notice to the family, or any spokesman for his mother or her family. 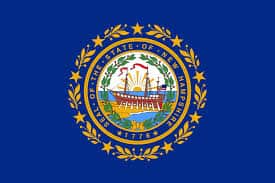 The hospital’s doctor told our General Counsel that they didn’t care what his mother or her family wanted concerning her care.  She was held against her will for four weeks until the family could schedule a hearing in the Probate Court.

Although RSA 464-A purports to give “victims” due process rights, it is, in fact, widely viewed in legal circles as a joke.

An individual who has his or her rights taken away pursuant to RSA 464-A supposedly has the right to an attorney, but, in fact, that right is regularly waived, even for people deemed incompetent (who wouldn’t seem to be capable of waiving their rights).

The proceeding is an ex parte proceeding in which neither the victim nor his or her family has any representation or right to attend.  It is conducted in places like the basement of Concord Hospital, and is widely viewed in legal circles as a “star chamber” or a “joke.”

Now, on the basis of this “kangaroo court,” you or your relatives could lose all of your gun rights.  And guess what?  If you want to get them back, you will have to plunk down thousands of dollars and bring an action in court.

It’s bad enough that anti-family bureaucrats are stripping Granite Staters of their rights without due process.  We don’t need to extend this constitutional abomination to abolishing gun rights protected by the Second Amendment.

SEE A SHRINK, LOSE YOUR GUNS.

One more thing:  Senate Bill 244 would allow a psychiatrist to take away your gun rights, without an order from any court, by involuntarily committing you under RSA 135-C:34-45 based on his subjective opinion on whether you pose a “danger.”

Given the fact that psychiatrists already have broad powers to commit individuals on an emergency basis, this provision could be easily abused to permanently disarm police, firemen and veterans with PTSD — plus even women with post-partum depression.

ACTION: Show up at the State House on Tuesday, January 14, at 9:00 am.  Sign up to testify against Senate Bill 244.  In addition, share this alert with your friends and neighbors.

FOR CALLS AND EMAILS: Tell Senators on the Judiciary Committee to OPPOSE SB 244!