Joe Manchin made a lot of political hay over the fact that he was a gun rights supporter when he ran for the Senate back in 2010, famously shooting a hole in a facsimile of the proposed “Cap and Trade” law — as it was bad for West Virginia and its coal industry.

He also trumpeted gun rights before his reelection in 2012.

But that was before he was safely returned to Washington for a six-year term.  What a difference an election can make! 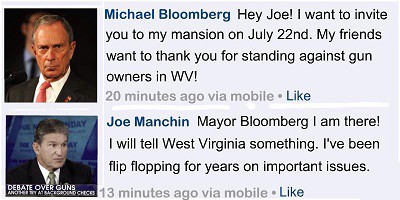 Now, crawling over the bloody bodies of children who were slain by a madman, Senator Manchin is going after one of the very things that most West Virginians love dearly:  their gun rights.

As you know, Senator Manchin teamed up with the notoriously anti-gun Chuck Schumer — and Senator Pat Toomey — to sponsor an amendment that would have prohibited PRIVATE gun sales that did not first get government permission.

That means that if you wanted to sell a gun to your neighbor or to your boss, your transaction would first need to pass through a government background check (a.k.a., registration).

Birds of a Feather

Manchin has even gone so far as to become bosom buddies with the archenemy of gun rights, New York Mayor Michael Bloomberg, who recently held a $1,000 dollar-a-plate fundraiser for the Senator.

Not surprisingly, the swanky fundraiser for Manchin was not held in West Virginia.  Instead, ole Joe hung out at Bloomberg’s mansion in New York.

If you are wondering what kind of affect those high dollar donations will have on the West Virginia Senator, you don’t need to wonder any longer.

Despite a resounding rejection of his gun control efforts earlier this year, Manchin has said that he is “absolutely” going to bring back gun control in September.  Even Senator Toomey has reportedly said that he’s “done with” trying to push gun control.

But not Senator Manchin.  Asked if he would push gun control again in the Fall, he said, “Absolutely, if we have time to sell the bill.” (Fox News Sunday with Chris Wallace, April 28, 2013.)

Why is Joe working so hard to “sell the bill” — that is, sell a gun control bill that violates the Constitution — when he should be working to save jobs which he is now officially responsible for losing?

The gun manufacturer, Beretta USA, has decided to leave Maryland because of the state’s increasingly crazy gun policies.  Company officials were CONSIDERING relocating to West Virginia, but no longer, as the gun maker has told West Virginia to take a hike.

If you guessed “Joe Manchin,” then advance to the head of the class.

Beretta issued a press release to explain.  “Especially due to Senator Manchin’s recent legislative choices [against gun rights], we have decided not to consider your State for our future plans of expansion,” wrote Beretta’s general counsel Jeffrey Reh.

So guess what, Joe? You just cost the state of West Virginia a lot of jobs that it could really use.

Those were jobs that are already being lost in the coal industry due to Obama’s “progressive” energy policies.  So what has the President done for your state lately, Joe?

And, what are the people of West Virginia going to do, now that these new jobs from Beretta won’t be opening up in the Mountain State?  Will they apply for policy positions at Bloomberg’s Mayors Against Illegal Guns (MAIG)?

Well, that may not be much of an option either, as it seems Bloomberg’s little anti-gun project is running its course right into the ground.

According to recent reports, Bloomberg’s MAIG has lost some 50 original members in the last few months. Some members are gone because the elected official lost his race (in some cases, because of anti-gun positions).

Others, however, defected from MAIG because they felt the group had misrepresented itself, advocating gun control instead of what they thought MAIG was supposed to be about, namely, an organization trying to crack down on “illegal guns.”

So much deception.  Why?

Because the majority of Americans don’t support gun control.  And that certainly goes for West Virginians, who are some of the most pro-gun citizens in the country.

And that’s why your help is needed.  You can make a big difference by taking action and encouraging your friends and family to take action as well.

1. Contact Senator Joe Manchin and demand that he cease and desist from all efforts to push gun control.  You can use the letter below to direct your comments to him:

* WEBFORM.  Go to his webform — at http://www.manchin.senate.gov/contact_form.cfm — and then cut-n-paste the letter below.

2.  MULTIPLY YOUR EFFORTS.  Get your friends and family — and all your acquaintances at work — to contact Senator Manchin.  Get them in on the act. There’s power in numbers. We here at GOA know this, as we’ve been doing it for over 35 years.

3. IN PERSON.  Attend one of Manchin’s Town Hall meetings to speak directly to him.  As a West Virginia citizen, you can email his scheduler at [email protected] and ask them to notify you when Manchin will be hosting an event in your area.

I am disgusted about your anti-gun votes and your continued support for gun control this year.

You have said that your amendment (Toomey-Manchin-Schumer) was a mild imposition on gun owners which only applied to gun shows and internet sales.  But in fact, it would do the following:

* Impose, for the first time ever, a ban on many, many private sales of firearms — requiring buyers to first get permission from the government;

* Sweep virtually ALL private gun sales into the background check system, as all gun sales advertised on a bulletin or the Internet would be covered;

* Expand the framework for a massive, national gun registry by adding millions of private gun sales into the NICS system; and,

* Weaken privacy protections, making it more likely that health records information could deny guns to millions of Americans — in a manner similar to the more than 150,000 military veterans who have already been denied their rights for ailments such as PTSD.

You seem more interested in doing the will of New York Mayor Michael Bloomberg than of representing the people who elected you.  Gun Owners of America tells me that Mayor Bloomberg recently held a $1,000 dollar-a-plate fundraiser for you in New York.

Really?  I find that reprehensible.

And while the gun manufacturer, Beretta USA, has decided to leave Maryland because of the state’s increasingly crazy gun policies, company officials are NO LONGER considering relocation to West Virginia.   Wanna guess why?

They say that it’s because of you.  “Especially due to Senator Manchin’s recent legislative choices [against gun rights], we have decided not to consider your State for our future plans of expansion,” wrote Beretta’s general counsel Jeffrey Reh.

So guess what? You just cost the state of West Virginia a lot of jobs that it could really use.

In July, the Gallup polling organization found that 52% of Americans think economic problems — including “Unemployment/Jobs” — is the “Most Important Problem” facing the country.  At the bottom of the list, only 2% of all Americans thought the nation’s most pressing issue was enacting more gun control.

Do you think that the 2% figure (favoring gun restrictions) is lower or higher in West Virginia?

No doubt, it’s probably negligible in this state — which is why I would urge you to get off your gun control kick and stick to issues that are really important to West Virginians.

John Roberts Was Wrong, and Here's Why