McCain on Attorney General Nominee Loretta Lynch: “No Republican should vote for her confirmation”

At a time when even the liberal John McCain believes it would be a travesty for any GOP senator to vote for anti-gun loon Loretta Lynch for Attorney General, New Hampshire Senator Kelly Ayotte is, remarkably, reportedly still on the fence.

Lynch, who supports a semi-auto ban, could be expected to use her position to implement that ban by executive fiat.

So a vote for Lynch is a vote to ban semi-autos.  But even worse, if confirmed as Attorney General, Lynch is being groomed to be the fifth anti-gun vote on the Supreme Court.  When Lynch, who has been dubbed “Eric Holder in a skirt,” bootstraps her AG job into a Supreme Court seat, the Heller and McDonald cases will both be reversed.  The Second Amendment, as far as the courts are concerned, won’t be worth the paper that it’s written on. 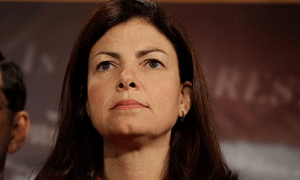 So, given what’s at stake, it’s a little shocking that an Ayotte aide is telling us that the senator still doesn’t know whether she wants to be perhaps the deciding vote on whether to eviscerate the Second Amendment.

We would hope that the Ayotte rumors are just that: rumors.  Because it would be unthinkable that a Republican senator from pro-gun New Hampshire would take such an anti-gun position when the very viability of the Second Amendment is at stake.

The opening question is whether Ayotte will SIGN Harry Reid’s cloture petition to shut down a pro-gun filibuster.  Has Ayotte forgotten that Reid recently used a fraudulent procedure to pack the federal appeals courts with liberal, anti-gun judges in a lame duck session this past December?

The more important question is whether any Republican will join Obama, Reid, and Schumer to VOTE to shut down the pro-gun filibuster.

If the handful of traitors side with Obama, Reid, and Schumer, we go onto the next step.  We would hope that, instead, on the cloture (or filibuster) vote, all Senate Republicans will side with gun owners and the Second Amendment — including both GOA and NRA — and Lynch’s nomination dies.

For any Republican to side with Reid and vote to shut down their own pro-gun colleagues by reaffirming an illegal precedent hatched by Senate Democrats would be an act of perfidy so profound that it is almost incomprehensible.

How Many Times Will Orrin Hatch Stab Gun Owners in the Back? — One time? Or four?