There seems to be a new atrocity almost each week:

* Obama ignores the law and tries to ban bullets — illegally.

* Obama ignores the law and tries to compile a gun registry — illegally. 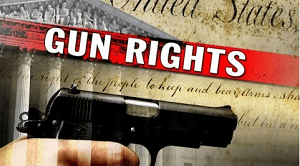 We now have an administration which has set itself up above both the law and the Constitution.

But this Wednesday, Tennessee legislators will decide whether Tennessee officials will be the storm troopers for Obama’s disregard of the law.

On that day, the Tennessee House Civil Justice Subcommittee will vote on House Bill 1341, sponsored by Representative Terri Lynn Weaver (R) and 10 other pro-gun reps.

House Bill 1341 is short and easy to understand:  It says that Tennessee public funds cannot be used to implement Obama’s illegal and unconstitutional gun control.

Comparable bills have already been passed into law in places like Kansas, Idaho and Alaska, and they are being actively considered in as many as a dozen states.

The rationale is simple:  The Supreme Court, in the Printz case, held that states cannot be conscripted against their will as implementers of a federal regulatory regime.  The same principle was used by the court in NFIB v. Sebelius to exempt the states from mandatory Medicaid expansion under ObamaCare.

So there is not a shadow of a doubt that Tennessee has the right to refuse to mindlessly implement Barack Obama’s illegal gun control.  The only question is whether legislators have the will. And that question will be determined in Nashville on Wednesday.

ACTION: Contact your state Representative and ask him or her to support House Bill 1341.

Republicans: Win or Lose; You Choose