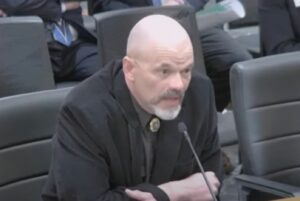 Debate over competing Second Amendment bills led to allegations this week that people wishing to speak on the issue were prevented from doing so during a committee hearing.

However, security video taken during debate on Senate File 102, the “Second Amendment Protection Act,” showed that at least one of the people who claimed to have been prevented from speaking did not approach to do so during the meeting of the Senate Judiciary Committee.

At issue was Senate File 102, which would prohibit Wyoming government entities from using public resources to enforce federal regulations and laws seen as infringing on the Second Amendment rights of Wyoming citizens.

The bill was approved in its final Senate reading on Friday and sent to the House for review.

While supported by Wyoming law enforcement and the Gun Owners of America group, the bill was opposed by the group Wyoming Gun Owners, which instead championed Senate File 87, a bill that would make any federal law infringing on gun ownership rights, such as tax increases on ammunition, null and void in Wyoming. The bill would also allow for lawsuits to be filed against law enforcement agencies trying to enforce those federal regulations.

SF87, sponsored by Sen. Anthony Bouchard, R-Cheyenne, failed to win introduction in the Senate and WyGO, represented by Aaron Dorr, criticized SF102 as “watered down.”

SF102 was discussed in the Senate Judiciary Committee on Monday, when Dorr and Bouchard both said they were prevented from speaking against it.

Bouchard said on the Senate floor Tuesday that he was not allowed to speak on the bill….

Cowboy State Daily reviewed two security footage videos of the meeting and one public recording of it.

In the security footage, multiple speakers rose and went to the microphone to testify.

During breaks between speakers, Dorr did not rise from his chair. He often leafed through papers or looked at his cell phone.

The video also showed Bouchard leaning on or standing near a wall by the entrance for about 25 minutes, while six different speakers took turns at the microphone.

After the sixth speaker, Oedekoven, Bouchard raised his hand to just above his shoulder level for approximately 2 seconds.

He later told Cowboy State Daily that Nethercott “looked right at him” at that juncture.

During this time, Nethercott, who had repeatedly cautioned presenters that time was limited, said “Further public comment…? It’s 9:43. You’ve got – counting down now – we will adjourn this meeting at 9:47.”

While she was still speaking, Mark Jones of Gun Owners of America, which supported SF102 to the criticism of WyGO, crossed to the microphone and sat down.

Bouchard walked toward the front of the room and stood just behind the front row of seats, against the wall. He remained there for about eight minutes, after which he sat down in the front row next to Dorr. Both remained seated until the meeting adjourned.