5 teens in custody for string of Indianapolis robberies

5 teens in custody for string of Indianapolis robberies 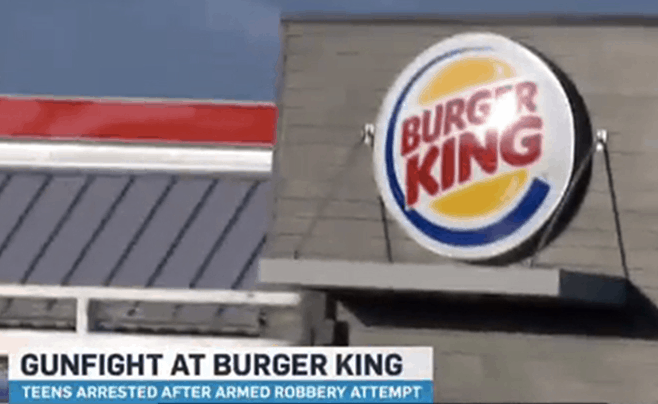 An attempted robbery at an Indianapolis Burger King last week was interrupted by an armed citizen and now the five teen suspects – believed to be responsible for a string of recent robberies – are all in police custody.

The incident unfolded around 9 p.m. Wednesday. As the concealed carry permit-holder, who also happens to be a firearms instructor, was leaving the restaurant with his food, the group of suspects were going inside. But the armed citizen, who has not been publicly named, noticed the suspects putting on masks as they walked through the door and immediately knew something was awry.

The man returned to the restaurant and walked in behind the suspects, who already had their weapons drawn. The man ordered the suspects to drop their weapons, but rather than complying they simply turned their guns on the man. At that point, gunshots were exchanged….

Authorities caught up with the suspects about 40 minutes after the Burger King robbery. Two of the suspects – Antonio Cowherd and Mikel Kendrick – are 19-years-old, while the remaining three are juveniles. All five are facing robbery charges.

[Editor’s Note:  It should be noted that every single one of these robbers evaded background checks in acquiring firearms.  Federal law requires that a licensed dealer may not see or deliver a handgun to anyone under 21. And while there are some legal ways for under-age persons to acquire handguns, there is no possible way that the three juveniles could have legally purchased their handguns from a licensed gun dealer.  Even if Indiana law required Universal Background Checks (aka, background checks on private purchasers) — it would make no difference; the juveniles would have been prohibited from purchasing handguns from FFL’s.  (So their ability to legally acquire a firearm, in any way they could now do so, would be unchanged.  Although it’s highly unlikely that any of the five acquired or possessed their guns lawfully.)  Hence, here again, we have bad guys getting their hands on guns; and in the process, they demonstrate the futility of background checks and their ineffectiveness in preventing the criminally-minded from acquiring weapons.]