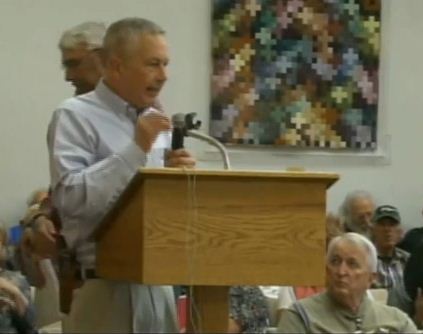 Recently, I was involved in a shootout in the village ofRuidoso (Spanish for noisy) near our southern border.  No, this time I was not using bullets.

Recently, I was involved in a shootout in the village ofRuidoso (Spanish for noisy) near our southern border.  No, this time I was not using bullets.

I had been invited by GOA members in the New Mexico town to participate at a village council meeting.  The chamber was filled to overflowing.  Folks were outraged that the village mayor, Ray Alborn, had issued an executive order banning firearms anywhere on village property.  Needless to say, half of us in attendance had hogs on our hips.  member Dr. Ray Seidel came dressed with an AR-15.  I knew right away I was not in .

The mayor issued his edict in spite of Article II, Section 6 of the New Mexico Constitution which prohibits municipalities and counties from regulating “in any way, any incident of the right to keep and bear arms.”

In spite of the state constitution’s clear language, the city attorney, Harry “Pete” Connelly, wrote an opinion saying that state law permitted the ban.  Calls for him to be fired erupted during the hearing.

The mayor was raised in by a single mother and never had any contact with firearms.  They scare him.  He offered as justification for his executive order that he wanted to ensure that people remain safe.

At the Council’s previous meeting, a citizen approached the podium with a sidearm in his holster and the Mayor had him disarmed.  KASA-TV in recorded the mayor’s response: “At that time I realized how unprotected we are in the front of the room. There’s 11 of us, plus all of our citizens and employees who were at the meeting. [It hit home] how unprotected we were.”

When I testified at the hearing, the Mayor said that if he could, he would ban firearms throughout Ruidoso.

Those from Ruidoso handled the legal and constitutional issues well, so I addressed the historical aspect of gun free zones.  Almost all of the mass murders in our country have occurred in gun free zones.  I told the Council that in February of 2008, an irate taxpayer charged into the chamber, killed two police officers, three councilmen and critically wounded the mayor before he was subdued by police who ran from other areas of the building.

’s council did not like the state’s concealed carry law and exercised the option in the law to declare their chamber a gun free zone.

In contrast to the almost 100 percent opposition from the public, a young woman named Andrea Reed — along with her three kids — was presented to the Council as part of a celebration of International Peace Day.  After receiving a certificate from the Mayor, Andrea and her kids cavorted around as if they were dancing around a Maypole.  They sang a little ditty about how peace is nice.

She remained for the gun ban item on the agenda and testified in favor of the Mayor’s position.  She suggested a compromise – that gun owners leave their guns at home because such firepower made her nervous.  I so wanted to assure her that every open carrier in the room was being very vigilant to ensure their guns did not jump out of their holsters.  We were successful and she did not get shot.  Whew!

The Council did not vote, but they are expected to vote down the Mayor’s gun ban.  Regardless of what they do, the ban is unconstitutional.

I did an interview on a Ruidoso radio station (KEDU 102.3 FM) from the Gun Owners of America office in Springfield, Virginia and urged listeners to attend the next village meeting — armed as before — as Councilors are then expected to vote on the ban.

Gun owners don’t have anything to fear because Police Chief Joe Magill is a sworn officer who is in the Oath Keeper tradition.  He told the Mayor that he would not arrest anybody for carrying in the Council chambers because such a ban — whether it’s a mere edict from the Mayor or an ordinance from the Council — is unconstitutional.

UPDATE:  On September 27, the Village Council voted five to one to rescind the Mayor’s edict.  Councilman Rafael “Rifle” Salas was the only negative  vote (as the Mayor does not vote).