The importance of the 2012 United States Senate Elections

The importance of the 2012 United States Senate Elections

While the 2012 presidential Election has the attention of most of the Left and Right media, a growing number of people in politics understand that the U.S. Senate races are also critical to our nation.

Why? Well, there are a few reasons.

First, our United States Supreme Court is sitting with a 5 to 4 conservative bent at this time, but with a single judge stepping down the Court could easily become 5 to 4 the other way. If there were no other reason, this would be enough to say we MUST take Harry Reid out of his leadership position in the Senate and make sure conservatives vote against any left-leaning judge. But there are more reasons.

Obama and Secretary of State Hillary Clinton have put the United States Constitution and the Second Amendment in a precarious position. Hillary is pushing the United States to sign onto the United Nations “Arms Trade Treaty” which, if ratified by the U.S. Senate, would put America’s gun rights under the regulation of the U.N. That’s reason number two why we must take back the Senate and get the gavel out of Harry Reid’s hands.

But that’s still not all.

The Senate has confirmed a host of radical, leftist judges to lower court positions, and several Obama nominees have been approved for other key posts in government.  Not surprisingly, ALL these Obama picks oppose the Second Amendment and are clearly trying to destroy it.

There are more reasons why we must change the makeup of the Senate, but let’s get to the key point—where can we make changes in the Senate to stop the radical left from doing more damage.

One of the most important states in the 2012 election cycle is Montana, where Republican Congressman Denny Rehberg is running against Democrat Jon Tester.

Left-leaning Tester will go out of his way to make sure Montanans believe he is pro-Second Amendment before the November vote, but let’s look at the facts.

On February 2, 2009, Senator Tester joined fellow Montana Democrat Max Baucus and voted to confirm Eric Holder as U.S. Attorney General. Holder has a career of trying to destroy the Second Amendment including using the power of government to drive the gun industry into bankruptcy. Before the confirmation vote, Senator David Vitter (R-LA) said that, “[Holder has] clearly advocated near universal licensing and registration, and he joined and filed an amicus brief in the District of Columbia v. Heller U.S. Supreme Court case arguing that the 2nd Amendment was NOT an individual right. That’s deeply disturbing.” And Wyoming Senator John Barraso said, “Given Holder’s career attacks on the Second Amendment, his nomination continues to be of great concern to me.”

As Attorney General, Eric Holder has done great damage to the Second Amendment.  His Justice Department oversaw the smuggling of thousands of firearms into Mexico — all as part of an operation called Fast & Furious, which was designed to increase calls for greater gun control in the United States.  Already, more than 100 U.S. Representatives, four U.S. Senators and two Governors have called for Holder’s resignation, but Senators Tester and Baucus have refused to join the call for removing the most anti-gun Attorney General in our history.

On June 25, 2009, Senators Tester and Baucus voted to confirm Harold Koh to be the Legal Advisor at the State Department. Koh has openly lamented that there is only so much that can be done from the “outside” to push gun control treaties, and that ultimately we need people like him in positions of power.

Senators Tester and Baucus voted to confirm Supreme Court Justice Sonya Sotomayor. She has held that there is “not a fundamental right” to keep and bear arms, and that the Second Amendment – whatever little it protects in her estimation – does not apply in the states, only in Washington D.C. Also, when asked during the Senatorial hearings if she favored the right of self-defense, Sotomayor stated that such a position was an “abstract question” and that she couldn’t think of a Supreme Court case that addressed the issue, ignoring more than a dozen cases where the high court has examined the issue.

On September 10, 2009, Tester and Baucus voted to confirm the nomination of Cass Sunstein to be “Regulatory Czar” – the nickname for the head of the Office of Information and Regulatory Affairs. Sunstein favors gun control and animal rights, even to the point of supporting the “right” of animals to sue humans in court. 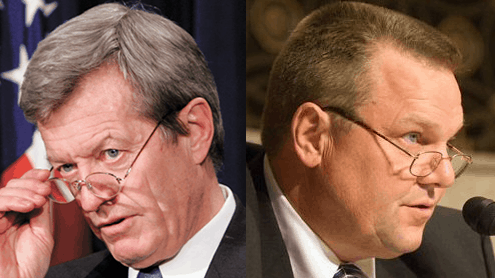 Senators Tester and Baucus voted on November 19, 2009, to confirm Judge David Hamilton for a position on the Seventh Circuit Court of Appeals. Judge Hamilton has stated that the Founding Fathers intended judges to amend the Constitution through “evolving case law.” While Hamilton cannot ignore what the Supreme Court said in DC v. Heller (2008), he has refused to admit that the individual right to keep and bear arms applies anywhere outside Washington, D.C. – instead, he just says he will rely on evolving “case law [as] developed in earlier incorporation cases.”

On August 5, 2010, Tester and Baucus voted to confirm Elena Kagan to the United States Supreme Court. Throughout her career, Kagan has shown open hostility towards the Second Amendment. Among other things, she has: drafted an executive order to ban certain semi-automatic firearms while serving in the Clinton Administration; suggested that the President could issue another executive order – bypassing Congress – to ban gun purchases without a police background check; and advised the Supreme Court (as a law clerk) to reject a gun owner’s Second Amendment claims. As a member of the Supreme Court, Kagan has been on the anti-gun side of every Second Amendment case before the court.

On May 4, 2011, Senators Tester and Baucus voted for another radical Obama nominee to the federal judiciary. John McConnell is a liberal, anti-gun activist who gave hundreds of thousands of dollars to far left candidates like President Obama and his allies in Congress. In response to Senator Tom Coburn’s (R-OK) questioning about the Second Amendment and the Bill of Rights, McConnell was evasive and refused to declare that the right to keep and bear arms is a fundamental, individual liberty. Tester’s and Baucus’ vote helped give McConnell the 50 votes he needed for confirmation.

And on February 17, 2012, Tester and Baucus voted to confirm Jesse Furman as a judge to the U.S. District Court for the Southern District of New York. Furman is an outspoken supporter of gun control. In a published article a number of years ago, he wrote that: “Probably the best explanation for the amount of violent crime in the United States is its fascination with guns.” He also noted that, “A second pressing issue is related to semiautomatic weapons – military assault guns [sic] that are easily converted to fully automatic weapons [sic].”

And he stated that “There is no reason that gun owners should not be required to register their guns.” With Tester’s and Baucus’ help, the Senate confirmed Furman by a 62-34 vote.

With their continual votes to confirm radical anti-gun Obama nominees to these positions of power, Senators Tester and Baucus from Montana have done massive damage to the Second Amendment rights of the citizens of Montana, and indeed, to the entire United States.

That’s why Gun Owners of America will do all we can to make sure Senator Tester is retired this year and replaced by pro-Constitution leader Denny Rehberg. And we will also be doing the same in 2014 when we do all we can to defeat Senator Max Baucus when he runs for re-election.

History has shown that when gun rights are taken away from the citizens of any nation, all other rights will soon be destroyed as well. Americans must wake up to the fact that there are politicians who “talk the talk” on the Second Amendment like Tester and Baucus, but they surely cannot be counted on to “walk the walk.” If we’re going to save America, these two must be defeated.