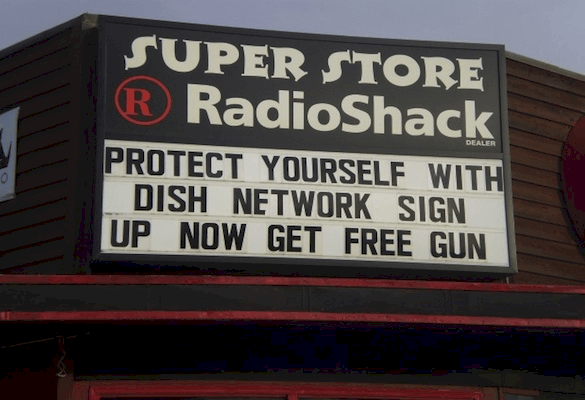 A RadioShack store owner in the small town of Hamilton, Montana, created a firestorm with a promotion intended to increase lagging sales: buy a satellite TV service, get a free gun.

People who sign a two year contract for Dish Network at this RadioShack Super Store have a choice between a gift card for a $125 pistol, a $115 shotgun or, if they’re not inclined to get the free gun, $50 in pizza.  Store owner Steve Strand initially promoted the offer with a sign reading, “Protect Yourself with Dish Network. Sign up now, get free gun.”  The sign, and the ensuing controversy, drew the attention of RadioShack’s Fort Worth, Texas corporate office.

Although Strand’s sales have tripled in recent months, RadioShack officials oppose the giveaway and have insisted that Strand pull the offer.  “This offer is not consistent with our recommended marketing practices for independent dealers,” whined the company’s director of communications in an email.  “We are in discussions with the dealer to end the promotion.”

In order to appease the company, Strand removed the sign from his window, and instead advertises a website www.getagun.net.  But he believes he is within his rights as an independent contractor to continue with the offer.

“RadioShack has taken the position that we’re tarnishing their brand image with the promotion,” Strand said. “I don’t think this is a negative impact. I don’t think they understand the way of life in Montana.”

Dish Network is also not so sure about the idea, and both companies told CNN they are “reviewing their options.”  Another satellite company, DirecTV, quickly nixed the idea when Strand planned to make the same offer.

The company’s vice president of public relations, Darris Gringeri, wrote in a terse email that “DirecTV is absolutely not following suit with the Dish Network promotion and immediately denied the request for such a promotion the moment it was brought to our attention.  I can assure you that Mr. Strand will not be offering this deal to potential DirecTV customers.”

But customers have been streaming in to the store to take advantage of the deal regardless.  Those who take Strand up on the offer redeem the gift card at a local gun dealership, where they must comply with all state and federal gun laws.

The gun store that processes the sale, Frontier Guns and Ammo, was also visited by CNN.  In an interview, Chad Ballman was asked about the perception of gun ownership in urban verses rural areas.

“I think in urban areas, the perspective is the only people that have guns are bad people.  You never hear about a good citizen armed with a gun who’s stopped a crime.  You only hear about the criminal who shot someone.” Ballman said.

Anyone who picks up the daily newspaper or watches the news on TV knows Mr. Ballman’s statement to be true.  The old news room saying “If it bleeds, it leads” is borne out on a daily basis.

Even though law-abiding citizens use firearms in self-defense as many as 2.5 million timers per year, that fact is rarely newsworthy because in almost all cases the mere brandishing of a gun is enough to thwart an attacker.  No blood, no story.  So the media rarely report on a story where a life was saved, or perhaps a rape or robbery averted when a woman pulls a gun from her purse in a dark parking lot.

When self-defense stories are covered it is usually because there’s an additional, interesting angle, such as the recent incident where a former beauty queen defended her life with a pink pistol.  The flip side of the debate is that in addition to gun control being unconstitutional (which is the primary issue), anti-gun advocates fail to acknowledge any benefit of gun ownership.