Are We Living in a Police State?

The answer to that question gets an emphatic “yes” by Cheryl Chumley in her book Police State USA: How Orwell’s Nightmare is Becoming our Reality.

As with any systematic abuse of power, we find instances of agencies regularly using force or spying against its citizens as a matter of policy.  But force does not always have to be employed.

Back in the 1950s, the CIA recruited journalists to project the CIA’s take on many issues in a program called Operation Mockingbird.  Foreign policy and political campaigns were targets of Mockingbird.  In other words, the American public was the target of government propaganda, but in a much slicker way than anything George Orwell ever imagined.

The program came to an end when congressional hearings put the light of day on Operation Mockingbird. 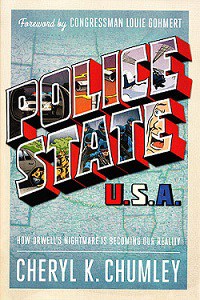 One of the most concerning developments is the use of SWAT teams to serve warrants (assuming one was obtained) in situations where no one’s life is in danger.

A deadly example comes out of a SWAT raid on the home of Jose Guerena, a 26-year old Marine and Iraq War veteran.  When police awakened Guerena and his sleeping family, Guerena thought a gang was invading their home.  He hid his wife and four-year old son in a closet and grabbed a rifle.  The cops saw the rifle and opened fire, hitting him over sixty times.

In the resulting investigation, Guerena’s rifle was found on the floor with the safety still on.  Guerena’s family has been awarded a $3.4 million settlement paid for by the county of Los Angeles, CA.

Oh, and the cops had the wrong address.

What a contrast to some forty years ago.  I was in the Virginia state legislature, and through a mutual friend, I was able to spend a morning riding along with a Fairfax County police officer.

At one point, the officer pulled up in front of a nice suburban house, told me to stay where I was, got out of the car and went up to the door – by himself.  He knocked a few times, and finally a sleepy young man came to the door in his skivies.  The officer went inside, and in about five minutes both of them came to the car.  The young man had been cuffed and was placed in the back seat.

When we got to the police station, the prisoner was booked on drug charges.  The cop never raised his voice, and treated the suspect with considerable respect.  Had the same warrant been served today in many jurisdictions, there would have been many police vehicles and lots of cops in battle dress uniforms with guns drawn.  And this always carries the risk of killing the suspect.

Another concern that Chumley raises is asset forfeiture — a practice that is a gross violation of the Fourth and Fifth amendments.  Private property is usually seized without a warrant and then, often suddenly penniless, the defendant has to prove his innocence.  The Bureau of Alcohol, Tobacco, Firearms and Explosives (ATF) uses this tactic all too often.

For example, beginning in early 2013, Gun Owners of America came to the legal defense of the Reese family that operated a gun shop in New Mexico, and found itself squarely in ATF’s sights.

Reeling from the fallout from its infamous Operation Fast and Furious and the bloodshed that ATF caused on both sides of the border by deliberately letting guns “walk” to Mexico, ATF apparently found it useful to distract its critics by blaming others for selling guns that might wind up in Mexico.

To make matters worse, before trial, the government seized everything of value that the Reeses owned — guns, ammo, precious metals, and other personal property — forcing them to rely on others to provide their defense.  Even though the family members were charged in a 30-count indictment, the jury acquitted the Reese family of all charges, including conspiracy and smuggling, except for four false statement counts.

This case is currently pending before the U.S. Supreme Court.  But even now, as the case drags on, the government spends unlimited taxpayer money, but refuses to return a penny that belongs to this devastated family.

Perhaps the most blatant and frightening example of police state powers is the President’s assertion that if Congress will not act, he will use his phone and his pen.  The President is declaring that, in effect, he has legislative as well as executive powers.  One term for this is coup d’état.

Push back has begun with Kansas nullifying unconstitutional gun laws and county sheriffs across the country threatening to arrest federal agents acting without constitutional authority.

One thing that would help rein in the President would be for the House of Representatives to defund unconstitutional executive actions:

* One example would be for the House to attach an amendment to a spending bill that says “no funds can be used to enforce gun control policies that have been unilaterally initiated by the President.”

* Another example would be an amendment providing that “none of these funds may be used to transport the army of illegal alien invaders anywhere but south of the border.”

But, of course, none of these amendments will become reality unless the American people insist on them.

For instance, even though the number two Republican in the House, Rep. Eric Cantor, was defeated by David Brat in large measure over the amnesty issue, House Republican leaders have been determined to ram it through.  They quite incorrectly believe that this will make Republicans out of Latinos.  Believe me, I attend a Latino church and can assure you that Latinos will only become Republicans by spending time with them and being involved in their lives.  A piece of legislation will have no impact.

We have our work cut out for us before the Republicans in Congress get serious about sizing back the federal police forces.  They are too easily distracted by rabbit trails such as “getting the Latino vote.”

It looks as though a few more David Brats will be needed to deliver the message.

Larry Pratt is the Executive Director of Gun Owners of America, a grassroots lobby representing 750,000 members and activists.