Independence Day festivities came early this year, as many Americans celebrated a fantastic anniversary in spring.

You see, it was this April that marked the first year we have been free from a British occupation, of sorts. We are no longer subject to the pompous drivel that was dished out on a daily basis for years by CNN’s British host Piers Morgan, who aired his last show on March 28 of last year.

Morgan was notorious for his anti-gun antics.  His hatred for America’s Constitution was legendary.  And his attacks on gun ownership were relentless.

But it was the Middle America that he so ruthlessly despised who had the last laugh.  Morgan later confessed that, perhaps, Americans were “tired” of him “going on” about guns.

Yes, we were tired of it; he was right about that.  Americans do get tired of being lectured by people who are perpetually “stuck on stupid.” 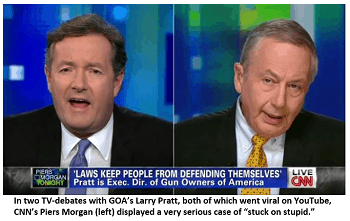 And that is why Piers Morgan has not been the only Brit to get “the boot” in recent years because he failed — or refused — to understand Americans’ love of freedom.

Reed Exhibitions is a case in point.  They are a British company that, for years, had run the Eastern Sports and Outdoor Show in Harrisburg, Pennsylvania.  This was a popular show that was well-supported by gun owners up and down the east coast.

But in 2013, they demonstrated what it means to be “stuck on stupid.”  Like Piers Morgan, Reed Exhibitions decided they were going to teach their American cousins a lesson about firearms.  Indeed.

After the Newtown shooting in December of 2012, Reed Exhibitions decided that the 2013 Outdoor show would not permit the presence of AR-15s in their Harrisburg show.  Such a firearm, reasoned Reed, would distract from the “theme of hunting and fishing, disrupting the broader experience of our guests.”

Cabela’s pulled out of the Harrisburg show followed by many other companies and groups.  The hemorrhage of companies led to the cancellation of the 2013 show.  Once the largest consumer outdoor show along the east coast, Reed’s Eastern Sports and Outdoor Show went the way of the Dodo bird and would never again open their doors under that management.

It got worse for Reed.

Reed had long worked with the National Shooting Sports Foundation (NSSF) to put on the annual SHOT Show, a huge annual trade show for firearms and related companies.  After working with NSSF for over three decades, the NSSF fired Reed and hired another company.

Gun shows across the country began to announce that they would NOT ban AR-15s from their shows.  The Harrisburg show was taken over by different management and opened up under a new name.

When the Great American Outdoor Show was held in Harrisburg last year, the 650,000 attendees were able to see exhibits of AR-15s and the like.  Reed Exhibitions was forced to learn the same lesson that George III had been forced to learn — keep your hands off Americans’ guns.

Sadly, AR-15 phobia is not just a British thing.  American politicians such as Barack Obama and former New York City Mayor Michael Bloomberg have also waged a war against guns like the AR-15.  And both have had to learn the same lesson as their British counterparts:  Americans like their guns.

Efforts to enact a Congressional ban on AR-15s have failed, as have attempts to outlaw the sale of common ammunition for the firearm.  And this has left both men extremely frustrated.  The President just recently told ABC News how “heart-breaking” it is that his administration has not been able to pass gun control.

That being the case, maybe Obama and Bloomberg would be happier if they moved to England.

Larry Pratt is the Executive Director of Gun Owners of America, a national gun rights lobby representing more than one million gun owners.

Man Pistol-Whips Concealed Carrier. That Was A Mistake.