Over and Over Again, You Have Cleaned Obama’s Clock — The battle over AR-15 ammo is just the most recent victory

Over and Over Again, You Have Cleaned Obama’s Clock
— The battle over AR-15 ammo is just the most recent victory

Recently, our Legislative Counsel was on a radio program.  And the host commented about how “frustrating” it was for the Second Amendment community to have to battle Barack Obama’s repeated, seemingly unending string of illegal gun grabs.

Our Counsel was stunned.  His jaw dropped to the ground.

Because the truth is that you, the gun owning activists of America, have whipped Obama’s gun grabbing rear end over and over and over and over again.  The recent retreat by Obama’s ATF on banning AR-15 “green tip” ammo is only the most recent example of the gun movement’s strength.  But this is not an isolated case. 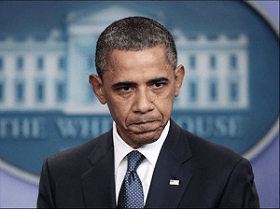 In fact, Barack Obama told a reporter a few months ago that his (Obama’s) greatest frustration during his presidency was his failure to enact a single word of gun control through his exploitation of the Newtown tragedy.

Soon after, Attorney General Eric Holder told another reporter that his single biggest failure was his failure to enact gun control.

This is probably the first and last time you will hear us make this statement, but “Barack Obama was right.”  You have handed him most of his most devastating defeats, and the damage these losses have done to Obama’s momentum and agenda have absolutely destroyed his legacy.

ONE:  THE DEFEAT OF TOOMEY-MANCHIN (THE UNIVERSAL GUN REGISTRY).  Shortly after Newtown, GOA said that we would oppose every single word of Obama’s gun control agenda.  And, while other gun organizations wavered, GOA remained steadfast in that goal.

And we won.  Rather, YOU won.  Remember these statements:

* “Gun Owners of America showed with one email alert that it could help flood the phone lines on Capitol Hill days before the Senate vote.” — National Public Radio, December 26, 2013

You won a victory so shocking to the liberal elites — so devastating — that no other group of Americans could have exerted the astounding power that you did.

TWO:  AR-15 AMMO BAN.  In February, the ATF proposed a ban on M855 “green tip” ammunition that is used in AR-15s.  The outpouring of opposition from gun owners was relentless — and the ATF says they received more than 80,000 responses, most of them complaints.  Working with our allies in other gun groups, we were successful in forcing ATF to back down from its planned ammo ban.

THREE:  REPEAL OF THE GUN BAN IN NATIONAL PARKS.  Despite facing a committed anti-gunner in the White House and the Democrat control of the Congress, GOA worked with Senator Tom Coburn in 2009 to repeal the gun ban in National Parks.  The language — tracking a draft originally prepared at GOA — was added as an amendment to a credit card bill which Obama was desperate to sign.

FOUR:  ANTI-GUN OBAMACARE.  After GOA complained, alone, for nearly a year about the anti-gun ramifications of ObamaCare, then Senate Majority Leader Harry Reid was forced to offer a “manager’s amendment” addressing many of our concerns.  As a result, insurance companies may not legally discourage gun ownership by jacking rates for guns.  And doctors cannot be REQUIRED to ask about guns and feed that information into a health care database.

Clearly, there are dangers that still exist for gun owners in this law, and we will continue to support a repeal of the law in its entirety.  But we should not overlook some of the important victories that we secured through a relentless barrage of grassroots’ opposition.

FIVE:  THE UN ATT.  GOA pushed for the first “test vote” on the UN Arms Trade Treaty in connection with the 2013 budget resolution. And we also pushed for appropriations language prohibiting implementation of the ATT by executive fiat.  The good news is that Obama now has less than a majority of senators in favor of ratification (he would need 67).  And language passed in last year’s budget prohibits him from implementing the anti-gun treaty piece-by-piece.

SIX:  OPERATION FAST & FURIOUS.  While bloggers David Codrea and Mike Vanderboegh were the initial reporters to blow the lid on this scandal, GOA was the first national, pro-gun organization to bring it to the public’s attention.  In fact, GOA acted fast and most furiously in opposing ATF’s illegal gun-running program.  Ultimately, Fast & Furious was dismantled, and its name has become a curse word, continuing to indict the illegality and incompetence of ATF.

SEVEN:  OPERATION CHOKE POINT.   The Second Amendment community arose, as one, to attack this monstrous program that was threatening to put gun dealers and gun makers out of business.  GOA provided legislative language to several offices, encouraging them to defund Operation Choke Point.  Our friend, Senator David Vitter (R-LA), insured that the Senate version of the Continuing Resolution completely defunded the operation.  And when Rep. Blaine Luetkemeyer (R-MO) did the same in the House, Eric Holder beat an immediate retreat and removed gun dealers and manufacturers from the list of targets.  (NOTE:  This appears to be an ongoing battle, albeit to a lesser degree than it was last year.)

EIGHT:  MULTIPLE SALES REGISTRATION.  Last year, the ATF made plans to extend its illegal multiple sales reporting requirements (aka, registration) to all 50 states.  In official comments submitted to the Bureau, GOA charged the ATF with attempting to create a national gun registry, “seeking to accomplish through back channels what it may not do directly.”  The pressure on ATF from the gun community was so withering that it ultimately denied that it had any intention of doing what it had said it planned to do.

NINE:  THE SHOTGUN IMPORT BAN.  During his first term, the Obama administration imposed an import ban on certain semi-automatic shotguns.  GOA provided several offices in Congress with draft language to defund the proposed shotgun import ban.  And, working with our Second Amendment friends, we legislatively outlawed that ban.

TEN:  THE 2010 AND 2014 ELECTIONS.  In March of 2009, there were four Republican and four Democrat Senators — the so-called “Gang of Eight” — who were conspiring to craft a bipartisan health care bill.  They never consummated their plans.  But had they done so, history world have been much different, and the revolution of 2010 would never have occurred.

To prevent a “bipartisan” health care monstrosity from passing, GOA went on targeted radio all over the country to put pressure on compromising Senators, to break up those negotiations.  At length, three of four Republicans pulled away from the table, ensuring that pro-gun Senators would not be sucked into a bipartisan “love fest” in support of Barack Obama’s signature piece of legislation.  In the end, the fingerprints on this anti-gun legislation would point back to his Party alone, allowing dozens of pro-gun congressmen to be elected in the ensuing election.

That was 2010.  Then again, beginning well before the 2014 elections, GOA laid the groundwork to insure that no part of the Second Amendment movement would support compromising “Red State Democrats” in 2014, as they had in 2008.  Unfortunately, there were forces in the Second Amendment community that were lobbying to pass a compromise amendment — the so-called Toomey-Manchin amendment that would have imposed a universal gun registry.

But GOA opposed this compromise completely and used the power of the grassroots to bring it down:

* The New York Times said, “The group [GOA] has already been successful in freezing senators, particularly Republicans, who have appeared to be on the fence about supporting [Toomey-Manchin] background checks.” (April 3, 2013)

* And the liberal Slate said, “When Sen. Tom Coburn, an Oklahoma Republican, backed away from bipartisan talks to expand background checks earlier this year, he did so after Gun Owners of America and its members flooded the senator’s office with e-mails and phone calls.” (April 4, 2013)

Had we not been successful in defeating Toomey-Manchin — and had a gun control compromise passed with the support of some in the Second Amendment community — then these groups would have had a “cumbaya” moment with Senators Mark Begich, Mark Pryor, Mary Landrieu, and Kay Hagan.  It would have been 2008 all over again.

Bottom line:  Senator Harry Reid would probably still be in control of the Senate.

So here’s a question:  Why would the members of one of the most powerful, most effective grass roots movements in America even consider being “frustrated”?

Yes, there have there been set backs that we are still trying to overcome.  And yes, there is a battle that will continue to rage over the next couple of years, while President Obama continues in office.

The battle will be fought out over the Loretta Lynch nomination for Attorney General … and the “fast track” legislation where we will keep the President from using trade agreements to impose greater gun control … and the appropriations process where we will work to defund more of Obama’s anti-gun agenda … and the reconciliation bill where we will, hopefully, overturn the anti-gun ObamaCare law … and the 2016 elections … and, so forth.

The good news is this:  The anti-gun Left is frustrated.

After the ATF recently retreated from its proposed ban on M855 ammunition, The Washington Post stated on March 10, “That didn’t take long” – referring to the fact that the ATF rescinded its proposed regulations even before the comment period was finished.

One can just sense their frustration in their headline: “How angry gun owners shouted down a ban on armor-piercing bullets.”

Yes, we’re in a battle to preserve our constitutionally-protected freedoms.  And sometimes we will suffer some setbacks.  But we’re doing a whole lot more winning.

So here’s an idea:  Given that the Second Amendment community exerts more power than just about any group in America, maybe that shouldn’t frustrate us.

Sure, having to fend off Obama’s unending attacks takes work. But our work has produced, in Biblical terms, “much fruit.”  And a lot of people can’t say that.

Erich Pratt is the Director of Communications for Gun Owners of America, a grassroots lobby representing more than one million members and activists.  Michael Hammond also contributed to this article.

Man arrested after trying to rob woman at ATM