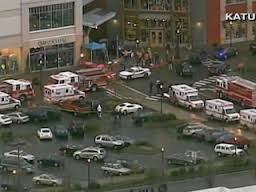 Once again, the nation has witnessed another high-profile shooting, where a cowardly thug made the conscious decision to inflict terror in a gun free zone.

On Tuesday night, a masked gunman killed two people at the Clackamas mall in Oregon, before killing himself.  According to local residents, the Clackamas Town Center has a “no guns” policy, even for those who are authorized to carry guns legally.

Earlier this year in Colorado, James Holmes specifically bypassed closer theaters — where guns were allowed — to target the particular theater in Aurora where guns are prohibited

Like Holmes, several shooters in recent years have targeted gun free zones where their potential victims were disarmed by law:  Columbine High School (1999), Virginia Tech (2007), and even Fort Hood (2009).

However, several potential massacres have been cut short — some by average citizens, others by off-duty officers:

* Armed citizens prevented several potential tragedies from occurring in 2012.  Samuel Williams came to the rescue of several patrons utilizing an internet café in Ocala, Florida.  And in Garden Grove, California, a 65-year old woman sent five burglars fleeing from a jewelry store.  In both cases, security cameras captured the heroic efforts of armed citizens who sent the bad guys fleeing — even tripping over themselves, as they stormed out the doors.

* Five years ago this month, Matthew Murray entered a large Colorado Springs church, armed with several weapons and a thousand rounds of ammunition.  But a woman with a concealed carry permit critically wounded him, thus saving the lives of hundreds of people.

* And at a Salt Lake City mall in 2007, an off-duty police officer brought a shooting rampage to an abrupt halt.  “I was in a situation that I was carrying my gun,” the hero, Ken Hammond, told reporters.

The lesson is clear:  good guys with guns save lives.  And while bad guys may be evil, they are not stupid.  They don’t typically target gun stores or police stations to perpetrate their crimes.  No, they consciously select areas where their victims are disarmed by law.

Erich Pratt is the Director of Communications for Gun Owners of America, a grassroots lobbying organization with 300,000 members.

They Have Blood On their Hands