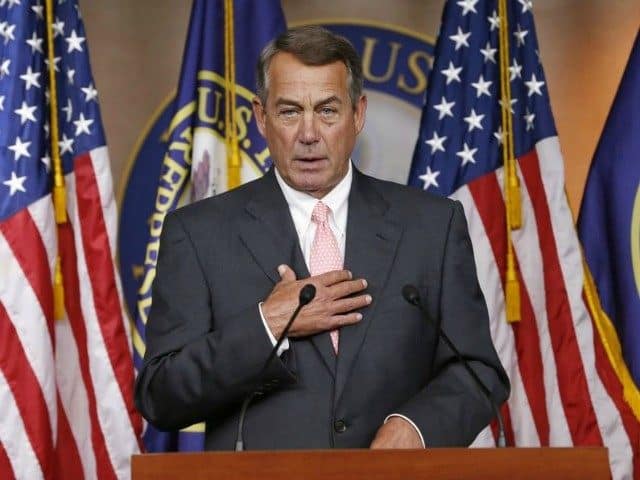 Over the weekend, Breitbart News sat down with Gun Owners of America’s (GOA’s) Larry Pratt to ask his opinion on House Speaker Rep. John Boehner’s (R-OH-8th) plans to resign, and Pratt said he was thrilled with the news. He said he also hopes Boehner is not alone among Republicans when he packs his bags to leave the Capitol for good.

At that time, the GOA said:

As long as John Boehner is Speaker, your gun rights are in danger. After all, remember in spring of 2013, when the pro-gun community was engulfed in the “battle of the century” over the Bloomberg/Obama gun control agenda? John Boehner could have nipped gun control in the bud by pronouncing that gun control would be “dead on arrival” in the House. Instead, he said that the “House will consider” any gun control proposals sent over by the Senate.

Speaking with Breitbart News on September 26, Pratt said, “I was very encouraged to see that Boehner is leaving office. And kudos to Representative Mark Meadows (R-NC-11th), a guy who hasn’t even been in office two full terms but who saw enough to know Boehner’s leadership was anything but.”

Pratt stressed that the GOA’s push to fire Boehner was complimented by the raw outrage of voters who spent the August Congressional recess telling their members of Congress how sick they were of moderation and of surrender disguised as compromise. He said “Republican voters figured out they were getting a magnificent little digital salute from the Republican leadership and they rose up. Boehner got the message.”

He then suggested that establishment Republicans who fail to notice Americans’ love for guns are actually putting themselves in a position to follow Boehner out the door.

Look, regardless of the negative narratives coming from the media, from politicians, or from the president, gun sales are going up in record months. And some months—when sales go way up—there is not really a precipitating factor that can be discerned. It’s just that people are increasingly of the opinion that they want to own a gun. In some cases it’s because the politicians have irritated them just too much and they no longer believe the politicians. In other cases it’s because the people are realizing that politicians can’t keep them safe.

Sen. Cruz: The Real Story of What Is Happening in Washington