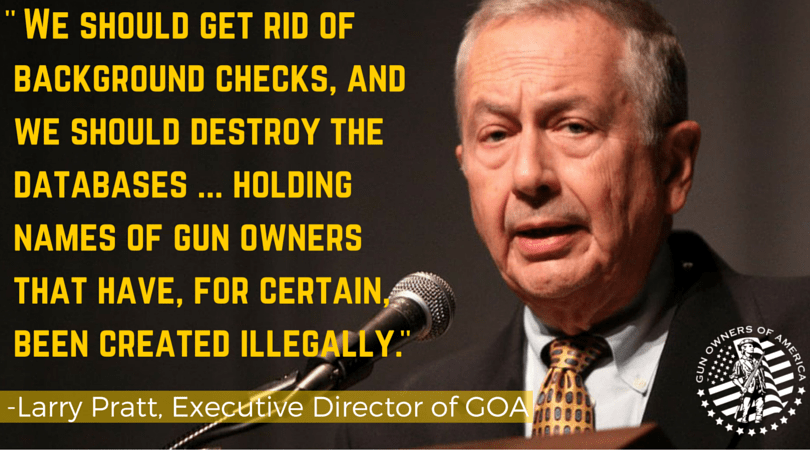 On August 31, Breitbart News spoke with Gun Owners of America’s (GOA) executive director, Larry Pratt, about background checks for gun purchasers, and he made clear that GOA opposed them when they were first introduced under President Bill Clinton and that GOA believes they should be abolished now.

Pratt also stressed that the database tied to them should be destroyed.

Our conversation began with a discussion of how yet another public attacker, Vester Lee Flanagan, demonstrated the impotency of background checks by passing one to acquire the gun he used to shoot and kill Alison Parker and Adam Ward in Virginia.

Pratt responded by pointing out that public attackers are not the only ones background checks fail to stop. He said, “During the last year of record, although the government has done millions upon million of background checks, they brought 14 prosecutions to court for trial–hardly a crime-fighting tool.” He said some people respond to this by pointing out that there were people who were “denied getting a gun at the point of sale,” but these people fail to note that criminals get guns in ways that completely circumvent the checks.

Pratt indicated there is “a further danger” from a background check that goes beyond the burden it poses to law-abiding citizens at the point of sale. He said:”I think it’s credible to ask if the NSA was making a recording of Aunt Susie talking to cousin Mary–which is very likely to be the most unexciting, unimportant conversation imaginable to the outside world–are we really to believe that when the government does a computer check on the background of an individual buying a gun from a dealer, that they are not going to keep that information, in spite of it being against the law to do so?

I can’t imagine that our folks over at the Department of Justice haven’t kept records of who owns what gun.”

Pratt said he hopes getting rid of background checks will help destroy “the illusion that government can protect us,” and that the elimination of background checks can be followed by the elimination of gun-free zones, where mass murderers ply their trade. He said that “would be a huge step in reducing what dirtbags can do when they decide to go out on a murder spree.”