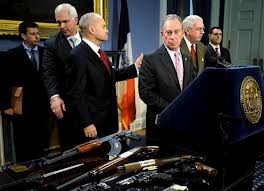 Gun Owners of America today sent New York Attorney General Eric Schneiderman a registered letter, demanding that he investigate Mayor Michael Bloomberg, as he “may be commingling government resources with those of the nonprofit organizations he controls.”

For this reason, they say, the Attorney General should “investigate this matter to determine if any laws have been violated, and if any action on your part is warranted … due to the strong possibility that the residents of New York City have been involuntarily paying to further Mayor Bloomberg’s personal, radical political agenda.”

Text of the letter we sent to the State Attorney General of New York.