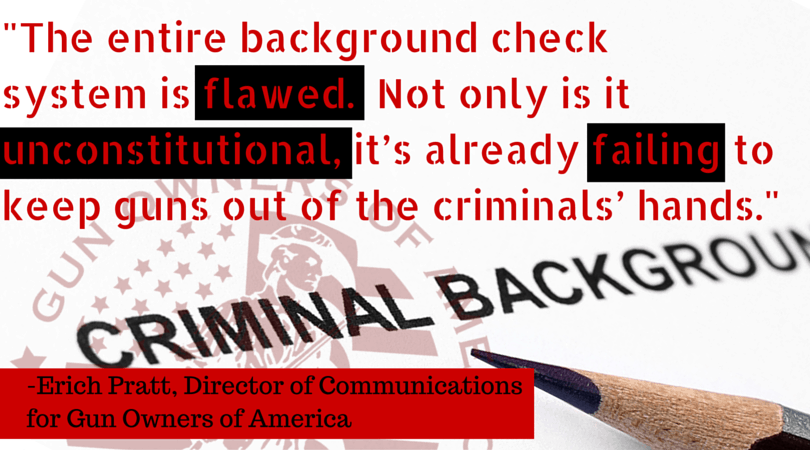 That Dylann Roof was able to purchase a firearm despite a drug arrest comes as evidence that background checks have been an “utter failure,” says a leading gun-rights group.

“Background checks for purchasing firearms have been an utter failure,” said Gun Owners of America spokesman Erich Pratt in a statement. “Arguing that we can make background checks better to stop criminals from getting guns is the very definition of insanity.”

The admission should have disqualified the 21-year-old Mr. Roof, charged in the June 17 slaying of nine black churchgoers in Charleston, South Carolina, from purchasing a firearm.

Mr. Comey called it a “mistake in a matter of heartbreaking importance to all of us.”

[The Brady Campaign] said background checks have been “incredibly effective and have saved lives by blocking more than 2.4 million gun sales — more than 350 every day — to people we all agree shouldn’t have them like domestic abusers, felons, and other dangerous people.”

However, Mr. Pratt responded by ticking off a list of high-profile shootings, including the July 1 death of Kathryn Steinle in San Francisco by an illegal immigrant with a lengthy felony record, as evidence that criminals are avoiding the background-check process by obtaining guns illegally.

Juan Francisco Lopez-Sanchez, who pleaded not guilty Tuesday but has admitted to shooting Ms. Steinle in what he described as an accident, said he found the gun, which reportedly belonged to a federal agent.

In other cases, such as the 2012 Aurora theater massacre, accused gunman James Holmes passed a background check before shooting and killing 12 people.

“The entire background check system is flawed. Not only is it unconstitutional, it’s already failing to keep guns out of the criminals’ hands,” said Mr. Pratt.

Mr. Comey said he has ordered a 30-day internal review of the FBI’s background-check process in firearms transactions.

A Burglar Broke Into a Texas Man’s Home. What He Saw Next Had Him Screaming an Apology and Jumping Through the Window.