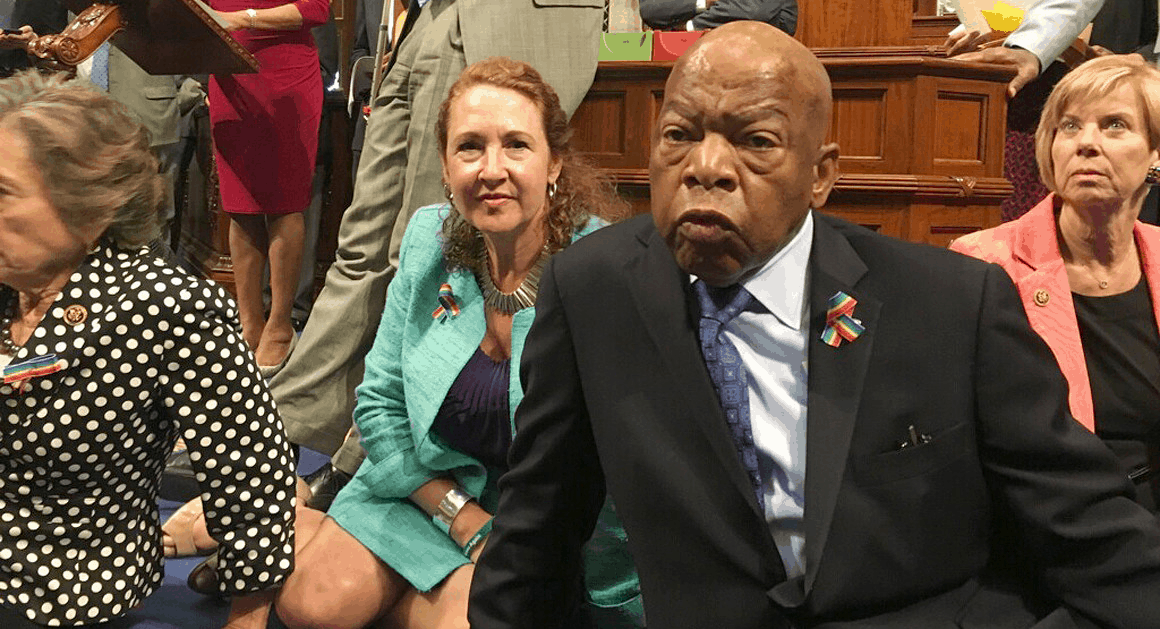 Once again, congressional Democrats are, hopefully, not going to get their way on gun control. So they did what any immature college student, meekly wearing his Che Guevara T-shirt, would do: They staged a sit-in on the floor — the actual floor — of the House of Representatives.

Mercifully, this action answered the question which was on our mind after Democrats petulantly walked out on a moment of silence for the Orlando victims.

The question was: Could infantile Leftists stoop any lower because they didn’t get their way?

And the answer is: “Yes, it appears so.”

Democrats have stopped even trying to justify their reflexive attacks on the Second Amendment – following a series of horrific incidents in which, demonstrably, no amount of gun control would have conceivably made any difference.

Let’s review the bidding; Omar Mateen passed a background check, so the Murphy universal gun registration would have made no difference.

In fact, Mateen’s Sig Sauer rifle was not even, technically, an AR-15; so it’s not clear that the semi-auto ban would have applied to it, even if it had not been grandfathered.

What would have worked, of course, is if some of the 320 helpless victims in the Pulse night club had the wherewithal to defend themselves, rather than being mowed down like helpless sheep. And, in fact, we welcome the fact that the LGBT community is apparently flocking to learn how to use firearms to defend themselves.

Of course, you wouldn’t hear any of this in any major American newspaper. They seem to take it as an article of faith that we need to create lots more helpless victims to honor those gun-free victims who have already died as a result of their anti-gun policies.

They also seem to be confounded at what could have created many copycat killings. But the answer, really, is fairly simple.

Every one of these mass killers – whether a radical jihadist or a deranged psychopath – obsessed over the press coverage given to the previous killers. They sat in front of their media feed or their (physical) wall of press clippings and concluded: “Aha! Now I know how I can get MY fifteen minutes of fame.”

So, if you want to bring a fairly quick end to copycat mass shootings, don’t ban guns. Ban NBC.

The more significant threat is stand-for-nothing Republicans in Name Only (RINOs) like Sue Collins and Kelly Ayotte, who are dragged around by Schumer on a leash. In an exchange for damaging their party this week, the media gave Collins and Ayotte “doggie treats.” But the dimwitted Ayotte may soon find that attacking her supporters because Chuck Schumer tells her to do so is not a winning strategy in an election year.

Democrats took it on the chin, politically speaking, when they went after gun owners in 1994.  They lost the Congress, as a result.  But just like then, Gun Owners of America will make it clear to voters this November that the same Leftist Democrat Party — along with certain Republican dupes — are guilty of conspiring to rob honest Americans of their freedoms.

We are going to hold them accountable for their actions.

Von Clausewitz said: “Position is everything.” If you can fight a political battle on your own terms, you almost always win. But if you pursue a “gun control lite” strategy in which you concede that guns are the “problem,” but promise to ban fewer than the other party, then November is going to be a very, very sad month for you.

CNN Gets Schooled by Guest With Actual Facts on Gun Violence in the U.S.