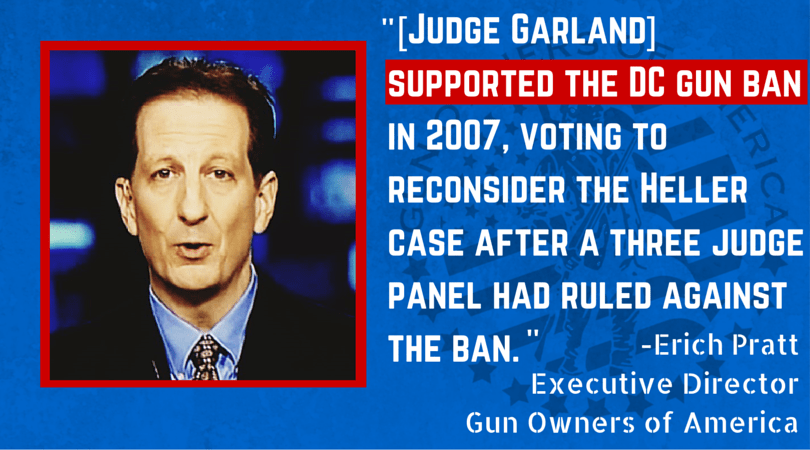 “Despite promises to nominate a consensus candidate, Obama has chosen a radical leftist in Judge Garland. He supported the DC gun ban in 2007, voting to reconsider the Heller case after a three judge panel had ruled against the ban.” – Erich Pratt, Executive Director of GOA

The Senate should “bury” President Obama’s judicial nomination and declare it “Dead on Arrival,” Gun Owners of America (GOA) urged the Senate.

Despite promises to nominate a consensus candidate, Obama has chosen a radical leftist in Judge Garland. He supported the DC gun ban in 2007, voting to reconsider the Heller case after a three judge panel had ruled against the ban.

Hence, we don’t have to speculate as to how Garland would vote on Heller if confirmed to the Supreme Court. He’s already voted against Heller once before, thereby showing he’d effectively rip the Second Amendment from the Constitution.

In a 2000 case, Garland voted to maintain the registration of gun owners, supporting efforts by the Clinton administration to use the instant check to illegally retain gun owners’ names for six months.

This shows that Garland is not only anti-gun, he supports the ability of a President to illegally use executive power to advance liberal causes.

He also pointed to the crucial gun-rights decision in McDonald v. Chicago (2010), warning that McDonald is in danger of being reversed along with Heller if the Senate buckles and decides to confirm Garland as the replacement for late Justice Antonin Scalia.

On February 13, the day of Scalia’s death, Breitbart News reported on the importance of Heller and McDonald by showing that Heller resulted in a decision that explained that the right to keep and bear arms is one individually possessed rather than collectively held.

Two years later, McDonald resulted in a decision that clarified the protections on the individual right to gun ownership by showing that Second Amendment rights are incorporated with Fourteenth Amendment protections. Together, the cases highlighted that self-defense–which includes the defense of one’s family–is a central component of the Second Amendment.

Pratt touched on these key aspects of Heller and McDonald, saying:

There is no freedom more fundamental than the right to defend one’s life and family. The Heller and McDonald decisions are hanging by a thread, as both were decided by 5-4 majorities.

If Garland were confirmed, we can expect to see more gun registration, more gun bans, more limitations on ammunition–and all of it would be approved by the Supreme Court. As a practical matter, good people will go to prison for exercising their constitutionally-protected rights.

For all these reasons, the Senate should refuse to even hold hearings on this nominee.