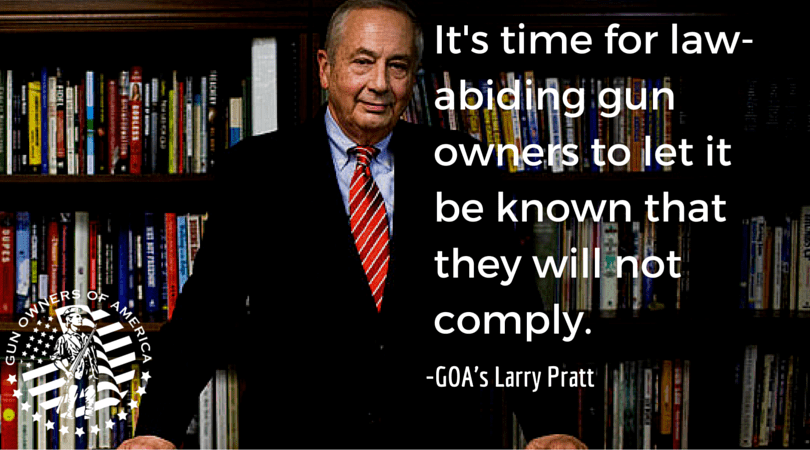 Gun Owners of America plans to mount legal challenges to the gun control actions announced Tuesday by President Obama and will urge Congress to cut off funding for the proposed increases in staffing for background checks and to investigate online gun sales.

“We want to see cutbacks and no funding for really any of these executive actions the President took,” said Erich Pratt, executive director of Gun Owners of America. “We’ll be working with lawmakers.”

The group, which says it is “the only no-compromise gun lobby in Washington” after a Ron Paul quote, bills itself as being more uncompromising than the National Rifle Association.

For its part, the NRA called Obama’s announcement “political rhetoric” and an “attempt to distract attention away from his lack of a coherent strategy to keep the American people safe from terrorist attack.” But powerful gun lobby did not detail specific plans to block funding or implementation of Obama’s proposals, though it did vow to continue fighting to protect the Second Amendment.“The proposed executive actions are ripe for abuse by the Obama Administration, which has made no secret of its contempt for the Second Amendment,” said Chris Cox, executive director of the NRA’s lobbying arm.

“The NRA will continue to fight to protect the fundamental, individual Right to Keep and Bear Arms as guaranteed under our Constitution.  We will not allow law-abiding gun owners to be harassed or intimidated for engaging in lawful, constitutionally-protected activity — nor will we allow them to become scapegoats for President Obama’s failed policies.”

The White House on Tuesday unveiled several executive actions aimed at curbing the illegal sale of firearms. For instance, the president’s 2017 budget proposal, which is due next month, will include funding for 200 new Bureau of Alcohol, Tobacco, Firearms and Explosives (ATF) agents, and the agency has created a new center to investigate illegal gun trafficking online. It also will dedicate $4 million and additional personnel to enhance the National Integrated Ballistics Information Network, a program that allows law enforcement to share information.

Gun Owners of America said it plans to mount legal challenges to Obama’s proposals and defend individuals who may face criminal prosecution for selling guns without a license or conducting background checks. Under the executive order, those who violate those rules could be sentenced to up to five years in prison and fined up to $250,000.

“With these new rules saying one or two guns without a background check can now land someone five years in jail and a $250,000 fine, we imagine prosecutions will ramp up,” Pratt said. “Even as we challenge it, we imagine there will be people we need to defend in the interim.

Will the Administration’s New Gun Regulations Lead to a Gun Registry?