Gun Owners of America (GOA) and its foundation (GOF) are in a huge, tug-of-war battle against the state of New York.

The good news is that o 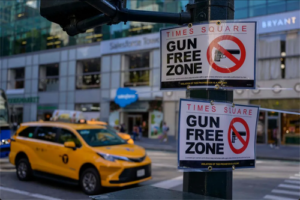 n November 7, we won a stunning VICTORY against the radically anti-gun state of New York that has viciously waged war on the Second Amendment.

Judge Glenn Suddaby ruled that New York’s new law – which requires citizens to give records of their social media history to the government to determine their eligibility to conceal carry – has imposed “unprecedented constitutional violations.”

This victory was not limited to New York. It was a victory against every local and state anti-gun government across the country that was hoping to establish a loophole to the Supreme Court’s recent pro-2A Bruen decision.

But anti-gunners are not going quietly into the night…

…They filed notice of their intent to appeal the decision – and on Tuesday, November 15, the appellate court gave New York what they were seeking. They secured a temporary stay of Suddaby’s ruling.

But regardless of this recent setback, GOA and GOF will keep fighting for your God-given rights in court.

And this is why we need your urgent support fighting back.

Anti-gunners are hoping to bleed us dry with legal fees until we reach the point where we can no longer fight back any longer. But your support will keep us in the battle no matter how long it takes.

As we continue to fight for the rights of all American gun owners, please make a tax-deductible contribution to Gun Owners Foundation’s Legal Defense Fund to ensure we can stay in the fight all the way to the Supreme Court.

Earlier this year, the Supreme Court issued its Bruen decision, which reaffirmed your Second Amendment right to keep and bear arms.

We warned politicians to fall in line with the Supreme Court’s ruling or Gun Owners of Foundation will FORCE them to.

We followed through on our warning by suing the state of New York for its draconian assault on the Second Amendment that effectively turned the entire state into a Gun-Free Zone.

Thankfully, we were able to secure a preliminary injunction in a federal district court, where the ruling enjoined the following provisions:

• Requiring good moral character
• Requiring the names and contact info of spouses and other adults in the applicant’s home
• Requiring applicants to disclose social media accounts for review
• The restrictions on carrying in public parks, zoos, places of worship, locations where alcohol is served, theaters, banquet halls, conferences, airports and buses, lawful protests or assemblies, and the prohibition on carrying on private property

Of course, our fight was certainly not over, as we have become used to seeing this battle rage back and forth.

The other month, we faced a temporary setback when the judge dismissed our case on very technical grounds.

But we refused to give up. Members like you helped us raise funds for the thousands of dollars in legal fees we have incurred to win this battle.

Not only did we secure a temporary restraining order following that setback… but we then secured ANOTHER victory with a preliminary injunction on the eve of Election Day.

But now with the appellate court’s recent stay of Judge Suddaby’s decision, we need your continued support to continue battling the anti-gun tyrants in New York.

Our previous victories have drawn ire from the anti-gun lawyers who are trying to take us down – but with your help, we’ll continue to fight back and win.

So please, make a tax-deductible contribution to Gun Owners Foundation’s Legal Defense Fund to ensure we can stay in the fight all the way to the Supreme Court.

Regardless Of Party, Pro-Gun Candidates Won Their Races This Week