New videos show Rittenhouse under attack as man points gun at him, other guns fire in background

Kyle Rittenhouse, the 17-year-old arrested Wednesday after shooting three people and killing two of them during rioting in Kenosha, Wisconsin Tuesday, has been charged with first-degree intentional homicide along with five other charges. 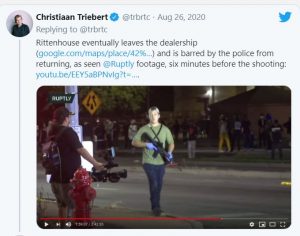 Rittenhouse, who crossed over state lines from Antioch, Illinois to Kenosha, a few minutes away, also faces charges of first-degree reckless homicide, two counts of first-degree recklessly endangering safety, attempted first-degree intentional homicide and possession of a dangerous weapon by a person under 18, the Chicago Tribune reported. The gun rights advocacy group, Gun Owners of America (GOA) has come out in support of Rittenhouse, in what they say was not intentional homicide but instead was self-defense. Videos showing the various angles of the shootings also show other people had weapons and may have been attacking Rittenhouse.

“Based upon publicly available video evidence, it appears that Kyle Rittenhouse was acting in self-defense,” the GOA said in a press release Thursday. “And despite fake news media reports, it is clear that Kyle was not firing indiscriminately into a crowd.”…