TAKE ACTION to protect gun owners from a rogue ATF

Tell ATF Where They Can Stick Their Regs!

Take Action: Please click here to use the pre-written statement to submit your own comments to the ATF!

“Erich Pratt, senior vice president of Gun Owners of America (GOA), said the subjective nature of the guidance shows that the ‘ATF has gone off into the deep end. GOA will rally the grassroots to fight these regulations, and if they eventually go into effect, we will commence immediate legal action to protect gun owners,’ Pratt said.” – The Washington Free Beacon, Dec. 17, 2020

Our four-year battle to save the Second Amendment has begun.

The ATF has always been a rogue agency — bent on destroying the right to keep and bear arms, whoever was president.  But now that the ATF has begun scheming with Biden staffers, it is going totally rogue. 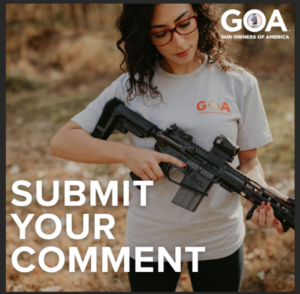 The first target is pistol braces.

In November 2012, the ATF issued a letter to SB Tactical allowing them to market their pistol brace as an accessory that does not turn a pistol into a National Firearms Act (NFA) firearm.

It wasn’t even a close call.  Its pistol brace was nothing but a piece of foam rubber and velcro — intended to stabilize the pistol, particularly important in the case of veterans who were disabled as a result of their service of this country.

Over the years, SB Tactical, its licensees, and competitors who have obtained ATF authorizations have openly sold these pistol braces or close variations.

As a result, over 5 million gun owners have purchased these braces or firearms equipped with them.

Now, on December 18, the ATF says it has retroactively changed its mind and has published “objective [sic]” criteria which are expected to lump many existing pistols with pistol braces into the same category as machine guns — as guns regulated by the NFA.

Owners would be required to register them on the national gun registry and undergo a prolonged background check.  The ATF assures us that the check would be expedited — even during a COVID pandemic where we’ve seen anti-gun officials projecting background checks (for concealed carry permits) will take YEARS.

As we stated in our press release last week:

The ATF Notice claims to provide “guidance” about how the agency will classify pistols, based on “objective factors” to be used when determining whether pistol braces convert pistols into short-barreled rifles.

Additionally, if ATF approves of one brace on a particular pistol submitted for classification, that classification may change if the firearm is altered in any way.

If you would like a more comprehensive explanation of these regulations, make sure to:

We predicted that things like this would be the logical outgrowth of the ATF’s regulation on bump stocks.  We also said that Attorney General Bob Barr was no friend of the Second Amendment. Now, over 5 million Americans might become ‘instant felons” if they don’t register, destroy or discard their firearms.

Rest assured that Gun Owners of America will use every resource at its disposal, including the courts, to overturn this unlawful, unconstitutional action.

Of course, the necessary “starting point” will be for millions of gun owners to bombard the ATF with comments opposing its slimy scheme.

Will public opposition cause the ATF to relent? We can’t know for sure, but public comments did force the ATF to walk back their M855 ammo ban in 2015. So there is a chance we can win. But even if we lose the first battle, it will give us a platform to go to pro-gun congressmen to nullify the “guidance” with an amendment to a must-pass bill.

The next four years are not going to be easy.  But, with your help, we can stop rogue bureaucrats from slicing and dicing our Second Amendment rights.

So please take action and use our pre-written statement to submit your comments to ATF today. And, again, you can read the ATF regulations here.