McConnell Helps Set Precedent that Could Weaken the Filibuster

I want to update you on a legislative battle that we asked you to take part in recently – a battle that involved the Senate filibuster.

But first, let me remind you that we have restocked our 2nd annual Christmas Ornament in the GOA store! We have less than 500 left and once these are gone, they are gone. So order yours today!

Okay, now that we have that out of the way. Gun Owners of America has worked with Senators over the past 25 years to use the filibuster to kill a lot of gun control. 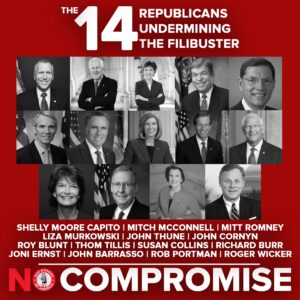 In fact, the reason Gun Owners of America has won so many tough battles over the past couple of decades is (1) because of our great members, and (2) because we have been able to anticipate the procedural battlefield BEFORE gun control was about to fall on our heads.

Sadly, Minority Leader Mitch McConnell and 13 other Republican senators cast a stupid vote last week that will make gun control and other nasty Leftist legislation harder to fight in the future.

You can see the vote here, where NAY is the pro-gun vote.

As we have told you before, the Senate filibuster is THE KEY which stops anti-gun Democrats from passing gun control and much more with a mere 51 votes in the Senate. Without the filibuster, Democrats would be able to:

Unfortunately, Senator McConnell got 13 of his fellow cowards to vote for a “one-time” change in the Senate rules allowing the debt limit to pass without a filibuster by a simple majority.

Of course, now that the rule requiring 60 votes to move controversial legislation has been breached once, it will be a lot easier to breach that threshold again.

In fact, the McConnell “one-time” patch which needed 60 votes was incredibly short-sighted.  Under the Senate rules, one supposedly needs 67 votes to change the rules.  So, even if one follows the rules, gun control now needs 7 fewer votes in the Senate in order to pass.

It’s not the end of the world for us — yet. But it was a stupid self-inflicted wound inflicted by McConnell that could set the precedent for passing gun control in the future with a mere 51 votes.

And all of this comes at a time when swing senator Joe Manchin is considering “tweaks” to destroy the Senate rules — probably with the encouragement of what these 14 Republicans just voted for.

So please write to your Senators. The system will automatically thank the 36 Senators who voted pro-gun, and will spank the other 64 Senators who voted wrong. For the latter group, the prewritten letters will tell them that you understand the dangerous game that they’re playing.