Send Kyle Rittenhouse a personalized message to go along with a replacement AR-15—courtesy of GOA and our partners!

Kyle Rittenhouse is a patriot.

That’s why GOA plans to give him a new AR-15 in the coming weeks to replace the one that was taken from him and which is probably sitting in a police confiscation locker.

After GOA tweeted our plan yesterday to present Kyle with a new firearm, Donald Trump, Jr. retweeted our post. 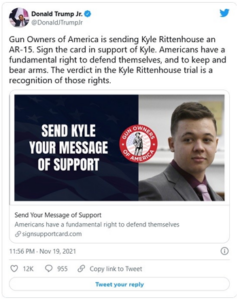 As you can imagine, this is driving the Left nuts. And the ultra-Leftist Huffington Post and other media influencers are attacking GOA for our decision to help Kyle get restoration.

But clearly, Kyle showed great restraint when using his firearm in self-defense.

GOA came out as a defender of Kyle before the trial.

And USA Today just published my article supporting the right of Kyle Rittenhouse and of all Americans to defend their lives with AR-15s.

Like many of you, GOA has followed this case for over a year and witnessed the anti-gun Left assassinate Kyle’s character.

That’s why I hope you will send Kyle a message of support, to go along with his brand new AR-15!

Let me say upfront, that we want to be a blessing to Kyle. If he would prefer a scholarship or grant toward his nursing studies instead, then we will auction off the firearm and contribute the proceeds for that purpose.

We want to be an encouragement for Kyle, especially given all the lies which were dished out against him by an anti-gun prosecutor.

Americans have a fundamental right to DEFEND THEMSELVES, AND TO KEEP AND BEAR ARMS.

The verdict in the Kyle Rittenhouse trial is a recognition of those rights.

If one thing has been made clear, the Second Amendment was on trial this week.

Even at the trial, Rittenhouse’s anti-gun prosecutor, Thomas Binger, told the jury:

“You lose the right to self-defense when you’re the one who brought the gun.”

And then the prosecution tried to convict him of illegally possessing a Short-Barreled Rifle (SBR) … when his gun clearly wasn’t an SBR.

After going through all that, Kyle could definitely use some support from the Second Amendment community.

So send him a note to go along with his new rifle—something encouraging for this patriot who just stood trial on national television. It will be given to him on behalf of all the Second Amendment supporters of GOA!

Last summer, violent mobs rampaged across America, burning down our country and our communities.

I’ll be honest, I was outraged, as many law-abiding citizens were.

Rittenhouse exercised his Second Amendment rights just as the Founding Fathers intended and protected himself with his AR-15 during a riot, when a mob was burning down his community.

But after Kyle defended his community from fires, looting, and destruction…

After all that, Kyle was arrested, and his AR-15 confiscated.

It’s going to be a while before the police return his firearm to him—if ever.

But Gun Owners of America believes the world is a safer place with an AR-15 in the hands of patriots like Kyle Rittenhouse.

That’s why we cannot wait to present him with a replacement AR-15 or the equivalent value toward his nursing studies.

Don’t forget to write your personalized note to Kyle Rittenhouse!

GOA will present your message to Kyle Rittenhouse alongside his new rifle.

Thank you for joining us in supporting Kyle.

He certainly deserves it.

Right flight and the ‘Gunshine State’