As you know, Gun Owners of America is the original “no compromise” Second Amendment Rights group in the United States. Since 1976, we have stood against efforts to take away the rights of law-abiding gun owners, and we have worked diligently to advance gun rights freedoms across America.

Tomorrow (Saturday, September 25) is recognized by Congress as National Hunting and Fishing Day, and there is no better time for GOA to announce our new Hunter Outreach Program and ask hunters to join us in the fight for our rights.

And to this end, I’d like to introduce you to Mark Jones, a Certified Wildlife Biologist and GOA’s National Hunter Outreach Director. He will be serving GOA on the frontlines, battling any backdoor attacks on our Second Amendment rights — attacks that would use hunting restrictions as an avenue for limiting our God-given rights. 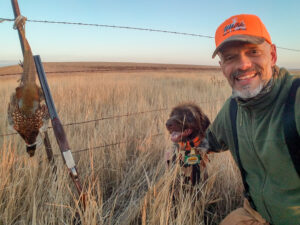 America’s over 15 million licensed hunters represent a formidable force that can help protect and defend the Second Amendment, and with the current administration in Washington, there has never been a more important time for all hunters to be engaged in protecting our right to keep and bear arms.

Many hunters are already GOA members, but we are asking ALL HUNTERS to join us in the fight to protect our rights during these unprecedented times in America.

The National Hunting and Fishing (NHF) Day website describes NHF Day as one that, “…..brings together sportsmen and women to celebrate the rich tradition of hunting, target shooting and fishing with national, state, regional and local organizations hosting related events. Launched in 1971 by Congress, NHF Day has consistently recognized hunters and anglers for their leadership in wildlife and conservation. NHF Day is observed and celebrated the fourth Saturday in September every year.”

Clearly, hunters are an integral part of American culture, and GOA has already stood up for hunters in a significant way! In keeping with our main mission to protect our Second Amendment rights and our new goal of engaging more hunters in our efforts, earlier this month, Gun Owners of America (GOA) became involved in the national hunting debate.

This petition was sent to the U.S. Department of the Interior’s U.S. Fish and Wildlife Service (USDOI/USFWS) as well as the Centers for Disease Control and Prevention (CDC) by the Center for Biological Diversity (CBD) and the Natural Resources Defense Council (NRDC).

Regarding this petition, GOA’s Mark Jones commented,“This petition threatens to change hunting as we know it in America and also represents a backdoor attack on the constitutionally-protected rights of gun owners. This petition, if it were to go into effect, would cripple many hunting opportunities and damage the American economy. Further, it would damage the authority of the 50 state Fish and Wildlife Agencies that have a great track record of managing the nation’s wildlife for generations. All hunters and Second Amendment supporters stand to be severely impacted if this petition were implemented, and the American tradition of hunting would never be the same.”

I cannot emphasize this enough. Putting draconian restrictions on hunters will severely impact the great tradition of hunting in this country. And this could ultimately reduce the number of young hunters coming up through the ranks — and limit the number of gun owners who are committed to defending our Second Amendment rights.

GOA has sent letters to both USDOI/USFWS and the CDC detailing the detrimental consequences of this petition for hunters and the United States economy. From the letter:

…..sportsmen and women would be restricted from many hunting activities. This would cripple wildlife conservation funding and deal a death blow to rural economies. Hunters who were restricted from transporting harvests (i.e., meat, antlers, hides, etc.), without unnecessary bureaucratic hurdles, would be less likely to take part in such pursuits. Long-term consequences for hunting are unknown but sure to be damaging…..Gun Owners of America urges the USDOI/USFWS and CDC to reject the CBD/NRDC petition.

The two letters can be read in their entirety here and here.

Mark Jones commented, “There is no better time than on National Hunting and Fishing Day to let our members and supporters know about our efforts to protect hunting and encourage hunters to join our efforts to protect and defend the Second Amendment. Join us in celebrating National Hunting and Fishing Day and consider inviting a hunter to join GOA. We will be announcing more about our new Hunter Outreach Program in the coming weeks.”

Hunters and non-hunting gun owners must all band together and stand against the onslaught against our rights we are witnessing in America every day. Please invite a hunter to join GOA and be on the lookout for more announcements about our Hunter Outreach efforts in the near future.

Gun Registry by the U.N.