Anti-gunners have found another way to crack down on so-called “assault weapons.” 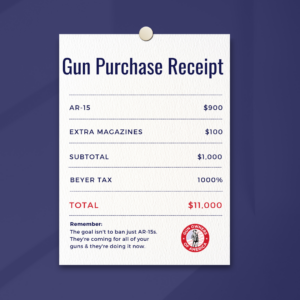 Rep. Don Beyer has introduced a bill in the House (HR 8051) that will impose a 1,000% FEDERAL TAX on a vast number of semi-automatic rifles, pistols, and shotguns – and every magazine holding more than ten rounds.

Beyer claims this tax could be passed with JUST 50 votes in the Senate through reconciliation, with Kamala Harris casting the tie-breaking vote.

At a time when Americans are getting crushed by Biden’s economy, a 1,000% tax on so-called “assault weapons” would essentially be a backdoor ban on commonly-owned firearms and magazines.

Yet Beyer even admits that his tax is not really about raising federal revenue, but “creating a pathway to pass a new restriction on assault weapons with a simple majority in the Senate.”

With a reconciliation vote expected THIS WEEK, we need your help alerting the 50-50 Senate to STRIKE DOWN this tax on “assault weapons” and magazines.

Please add your name to our pre-written letter to STOP the 50-50 Senate from levying a 1,000% FEDERAL TAX on common self-defense firearms and magazines.

Anti-gunners have now given themselves two possible paths in the Senate to crack down on magazines and firearms that millions of Americans own:

Warren said she wants to “use every tool available” to make it impossible for the public to acquire “assault weapons” – “and that includes taxes.”

In fact, Warren said she wants to make it impossible for people to buy “weapons that are used for murdering people.”

Can’t EVERY weapon be used for murdering people?

But of course, that’s the TRUE aim of anti-gun fanatics like Warren: ending all private gun ownership in America.

Senator Warren doesn’t care that you have a constitutionally protected right to keep and bear arms.

Imagine if the government levied a tax on your First Amendment right to protest, speak freely, or practice your religion. That’s exactly what these anti-gunners are doing to your Second Amendment rights.

But with this bill able to be passed by a simple majority through reconciliation, GOA needs your URGENT help pressuring the Senate to STRIKE IT DOWN.

So please, add your name to our pre-written letter to STOP the 50-50 Senate from levying a 1,000% FEDERAL TAX on so-called “assault-weapons” and magazines.

New York Gun Policy: an Ode to the Historic Racism & Bigotry of the Past