Gun confiscation is now on the table in the U.S. Senate. 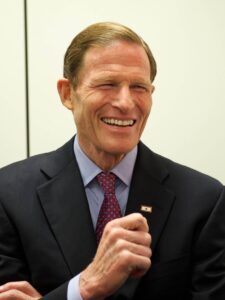 Under the “leadership” of anti-gun Senator and Committee Chair Senator Blumenthal, the Senate Judiciary Subcommittee on the Constitution is hosting a hearing on Wednesday at 2:30pm that will discuss “Red Flag” gun confiscation orders.

Unfortunately, Senators—caught up in Swamp politics—rarely hear this No Compromise position or read the Constitution for themselves.

Some Republicans, however, have dipped their toes in the waters of gun control, hoping to find a so-called “constitutional” version of gun confiscation.

One example would be Republican Senator Marco Rubio’s red flag bill (S. 292), which has been cosponsored by Republican Rick Scott of Florida.

Thankfully, there are offices which are realizing that the fundamental principle of a “Red Flag” GCO is to take people’s firearms away with no due process whatsoever.

So we need you to keep reminding them—and especially the Republicans and the “swing” Democrats (like Manchin of West Virginia, Sinema of Arizona and Tester of Montana).

I’m sure you understand the makeup of the Senate well-enough to understand that if anti-gun Democrats can’t find ten Republicans to support their gun confiscation scheme, then they fall short of passing gun control.

That’s right. Schumer and his fellow Democrats need ten Republicans to support their gun confiscation scheme in order to shut down a filibuster threat.

Again, that’s why I need you to contact all the Republican Senators, along with a few “swing” Democrats. Tell them that no gun owner in their right mind would see “Red Flag” Gun Confiscation Orders as a good faith or bipartisan idea.

And tell them how researchers have found that GCOs are ineffective at reducing crime, murders, suicides, or the number of people killed in mass public shootings.

So, what can Senators do to address acts of violence committed by calculating mass murderers or the mentally ill who have their first diagnosable psychotic break?

The only thing that stops an evil person with a gun is a good guy or gal with a gun—and the Second Amendment enables honest citizens to do just that.

The problem is that many states severely restrict citizens from exercising their right to bear arms.

This is done through burdensome and costly may-issue permit systems and through gun-free zones, where over 90 percent of mass shootings occur.

Embracing our core founding principles and respecting our Second Amendment by passing Concealed Carry Reciprocity (H.R. 38) and eliminating gun-free zones are the two most important things Congress can do right now.

So please take action above!