Anti-gun Democrats like Joe Biden and Nancy Pelosi will never stop until they’ve solidified their power for generations to come. 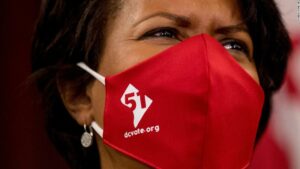 Right now, the U.S. House is preparing to vote on permanently adding two anti-gunners to represent the District of Columbia in the Senate.

Here is the anti-gunners’ plan.

But you may be wondering why a Second Amendment organization is bringing this to your attention.

It’s because D.C.’s statehood could have massive impacts on your right to keep and bear arms.

If this were to happen, there is a strong chance that the Senate would become permanently anti-gun by adding two guaranteed, gun control-supporting Senators.

This would allow the Senate to restructure its rules so that near-total gun bans could be passed with ease.  It would result in the courts being packed with anti-gun zealots. In short, there would be no recognition of the Second Amendment.

Delegate Eleanor Holmes Norton, who cannot even participate in the legislative process on the floor of the House of Representatives, has proposed D.C. statehood with H.R. 51. On Thursday, Nancy Pelosi plans to force a vote.

This anti-gun bill would create a small federal district but give two Senate votes to the few hundred thousand anti-gunners who live in the District. Notably, D.C. would remain a district insofar as American taxpayers would have to plow billions of dollars annually in order to save it from bankruptcy.

The Founding Fathers seriously considered and explicitly denied the District statehood in Article 1, Section 8 Clause 17 of the Constitution. James Madison even wrote that denying statehood to the District was an “indispensable necessity of complete authority at the seat of government.”

In Federalist 43, Madison noted that if D.C. were made a state, then your elected representatives might become unduly influenced and even coerced by the District’s government. Of course, that is exactly what anti-gun Democrats want.

Instead, the Founding Fathers decided that Congress “exercise exclusive legislation in all cases whatsoever” over the District.

What You Can Do About It

D.C. statehood is expected to come up on the floor of the House this Thursday, so we need you to urge your representative to vote against D.C. statehood immediately.

Because of your votes in November, the Second Amendment has more supporters in the House of Representatives in the current 117th Congress than in the previous 116th Congress. GOA expects Pelosi’s margin for victory to be razor thin, and so we need you to act!

Last year, the GOP attempted a procedural move that, if tried again, could possibly defeat the D.C. statehood bill. Republicans tried to get the bill sent back to a committee so that Constitutional Carry could be added to the bill.

Can you imagine? Insisting that D.C. adopt permitless carry before they can become a state! If successful, such an amendment could result in killing the D.C. statehood bill because Pelosi & Co. would bury it before allowing another permitless carry state to enter the union.

As mentioned above, the votes are so close now, there is a better chance that such an amendment could derail this statehood bill! So please, get on the phone and call your elected representative immediately at 202-224-3121.

After you have called, we need you to take action and send a follow-up email using our automated alert system using the form above.

Thank you for your dedicated efforts to fight back against the anti-gun agenda in Washington D.C.