“Don’t overlook Gun Owners of America — they can be scrappy and have a devoted following.” (Guns Magazine, March 30, 2021)

We are in the midst of a HUGE battle to save our Republic. 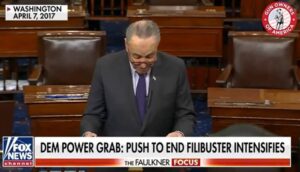 Senate Democrats want to scrap the filibuster so they can jam gun control down our throats.

These hypocrites used to feign support for the filibuster when they were in the minority.

But now that they’re in the majority, anti-gun Democrats like Joe Biden have changed their tune on the Senate filibuster which requires a 60-vote hurdle before passing legislation.

Biden Now Supports Ending Filibuster — Held Meeting On How ‘Big,’ ‘Fast’ He Can ‘Jam Through’ Agenda

Joe Biden and his fellow cronies want to eliminate the Senate filibuster. Why? Because then anti-gun Democrats will be able to:

This would be the beginning of the end of our Republic.

Thankfully, every Republican is standing firm so far against getting rid of the filibuster. And there are three Democrats who are (maybe) standing with them. If you live in Arizona, Montana or West Virginia, be sure to call your Senator at the number below:

All three Democrats have indicated that they want the Senate procedure to remain.

But Joe Biden is doing everything he can to buy them off. Just recently, Biden nominated Manchin’s wife, Gayle Manchin, to the Appalachian Regional Commission for a job that pays $163,000 per year.

One article put this well: “Biden Bribes Manchin with $163K Job to Wife.”

The “bribe” is all about trying to get Manchin’s support for ending the filibuster. Who knows what other “bribes” Biden is offering to Sinema and Tester.

The Democrats are turning up the heat and putting pressure on these three Senators, which is why we need to counter that pressure.

Your efforts make a HUGE difference.

One legislator told one of our state directors this week that the emails from our grassroots members strike “fear” into the hearts of his colleagues. If it weren’t for “the emails that they get,” he said, there wouldn’t be the votes to get pro-gun legislation passed.

If we can maintain a LOUD and PERSISTENT pressure, we can encourage many legislators to do the right thing and to resist Joe Biden’s bribery tactics.

Please contact your two senators and urge them to maintain the filibuster.

And if you live in these three states – Arizona, Montana and West Virginia – please call your Senator right away:

Tell them to OPPOSE ANY LIMITATIONS on the filibuster. Remind them that Democrats will one day be in the minority again, and they will then want to use the filibuster.