VICTORY: GOA Fighting to Reopen Gun Stores Around the Country

Thank You for Helping GOA to Achieve These Important Victories

GOA wants to thank the entire GOA community for its help and support in these very difficult times.

GOA has remained on the frontlines fighting for your rights both at the national and state levels — and we are experiencing some tremendous victories.

But we couldn’t do it without your help.

We realize that during these difficult times, many of our members may be experiencing financial difficulties during our repressed economy. And if that describes you, please do not feel any compunction to contribute now.

If you can help, you can click on the image to the right or hit the link here.

Regardless, we want you to know that GOA will remain fighting for your rights.

The anti-gun Left is trying to take advantage of crisis moments, like what we’re facing as a nation, to wage war on our rights that are protected under the Second Amendment.

So we hope that today’s alert will encourage you!

What you’ll read below gives you two of the most recent victories that we’ve been able to achieve, as a result of the help from GOA supporters.

Last week, a county in the Tar Heel State ordered gun stores throughout the county to close. 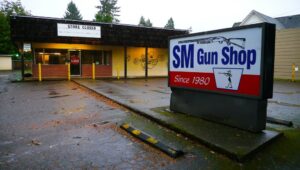 As of yesterday, however, Wake County has revised its emergency order and has reopened gun stores.

In an email to GRNC’s head Paul Valone and myself, the county attorney informed our legal team that the county would revise its initial policy to comply with Gov. Roy Cooper’s “stay-at-home” order, which allows gun stores that practice social distancing to remain open.

GOA is pleased to see this reversal from Wake County, as the county’s original order was an egregious infringement on the right to keep and bear arms and went against federal guidance and state law.

ICYMI: We won another huge victory over the weekend!

As we have reported to you in previous alerts, several states and localities around the nation have used the Covid-19 pandemic to order gun stores closed.

Hence, Gun Owners of America and Gun Owners of California sent a letter to the Trump administration last week, urging it to revise their official policy regarding what constitutes an essential business during a state of emergency.

Thankfully, after GOA began working with Trump Administration officials on this important topic, gun stores were added to a revised list that was posed by the Department of Homeland Security (DHS) this past Saturday.

Even though this bureaucratic determination is advisory in nature, states that legally adopt DHS guidance for their state should now recognize gun stores and shooting ranges as “essential businesses.”

Anti-gun politicians across the country are abusing this crisis to further their gun control agenda. And this comes at a time when a plethora of prospective first-time gun buyers are seeking to exercise their right to keep and bear arms.

Given the widespread infringements on our constitutionally-protected rights during this pandemic, GOA is thankful that the Trump administration heeded the pleas of gun owners in this particular situation and stepped forward to protect the rights of Americans.

Again, thank you for all your activism and support!

Stay tuned, as we’ll be bringing you more good news which you may have missed in the coming days.