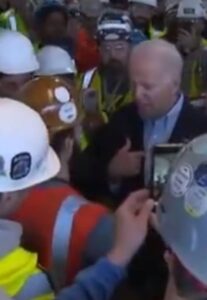 But our former Vice President, Lyin’ Joe Biden, is fully up to the task!

Confronted by members of the United Auto Workers in Michigan for his previous anti-gun Second Amendment stands, the foul-mouthed Biden started out by cursing at them: “You’re full of sh*t.”

But “methinks he doth protest too much.” Because in this interview with CNN’s Anderson Cooper here, after Biden is asked whether his administration would come for their people’s guns, Biden answers “Bingo!”

So he simply lied to the UAW workers at the Michigan plant.

Then, like every anti-gunner since Ted Kennedy, Biden claimed that he was “pro-gun” because he owns two shotguns and his “sons hunt.”

Newsflash Joe: the Second Amendment has nothing to do with hunting.

But let’s make this perfectly clear: The rich and powerful seldom feel that THEY should go unarmed and unprotected. Rather, their position is that the “little people” — like you or me — should be denied the constitutionally-protected rights accorded to wealthy and privileged people like themselves.

If this were a Republican candidate who had just made a bone-headed comment, the entire leftist media would be demanding that every GOP candidate from coast-to-coast now distance themselves from the one who made the offensive remark.

But all we hear from the rest of mainstream media right now is … crickets. Although kudos to Fox & Friends for bringing Jerry Wayne, the UAW worker who confronted Biden, on their show yesterday morning.

The rest of the liberal media, however, won’t demand that Democrats distance themselves from Biden, we can.

Insist that Democrat leaders distance themselves from Biden!

So we need to demand that House Speaker Nancy Pelosi and Senate Minority Leader Chuck Schumer either stand up for Joe Biden or distance themselves from him.

Ask them if they are going to support Democrat Joe Biden’s anti-gun remarks or whether they will demand that Biden apologize to the union worker he recently insulted. You can Take Action above.

The media won’t ask these tough questions, so we need to fill in the gap.

If anything, the anti-gun media is already covering for Lying Joe. MSNBC’s Jon Favreau concluded that Biden’s hostile and foul-mouthed response shouldn’t offend anyone EXCEPT people who “really like their guns.”

Less than two weeks before, Joe Biden had said that gun policy in his administration would be set by Robert “Beto” O’Rourke.

So, on one hand, Biden looks the autoworker in the eye and claims he’s not going to confiscate his guns.

And, on the other hand, he’s made it clear that he’s going to seize semi-autos by force — without any grandfather clause or any mercy.

The only grace note is that the senile, addled Biden said he had no problem with “AR-14’s” [sic].

Joe Biden has lost it!

There are only two potential explanations for all of this — and they aren’t mutually exclusive.

One is that he is senile.

The other is that he is a pathological liar.

Either way, it’s clear that America will be at a crossroads on November 3.

Either we’ll have gun confiscation raids in the middle of the night — reminiscent of past tyrannical regimes.

Or American gun owners will turn out in massive numbers to repudiate the enemies of freedom.

But no one should sleep through November 3 with the misimpression that the battle will be easier if the anti-gun leftists win.