Military to Civilian Life: How to be a 2A Advocate 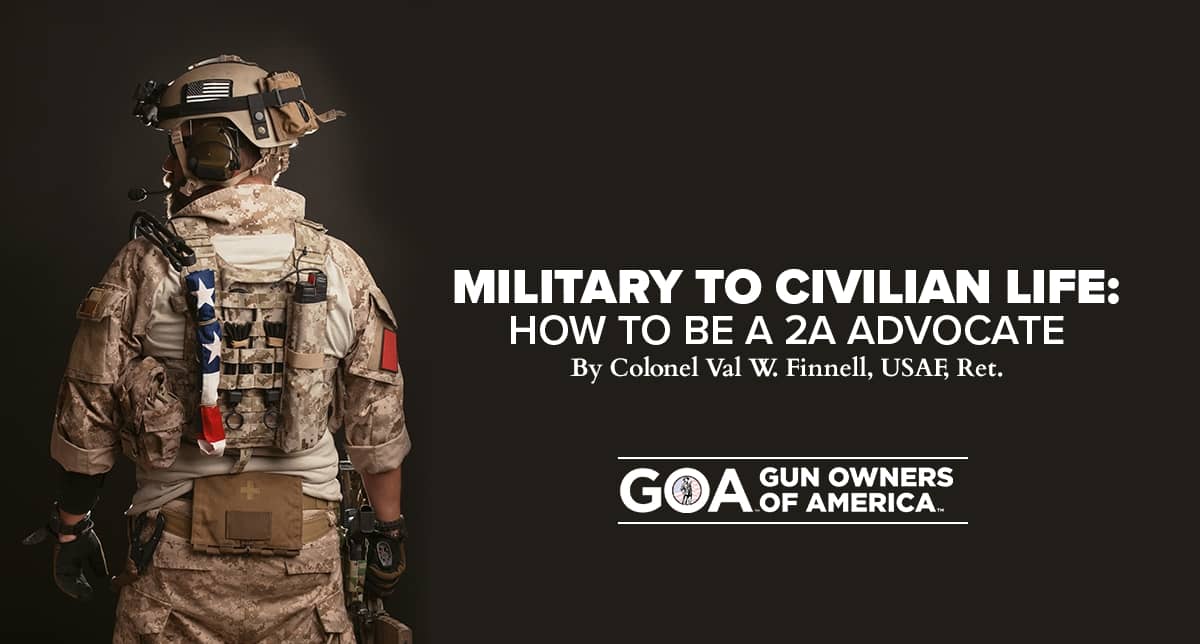 Every military person, whether officer or enlisted, took an oath to “support and defend the Constitution of the United States against all enemies, foreign and domestic.” And if you have taken this Oath, then you know it never expires. It’s indelible. Once you raise your right hand and are sworn in, you leave civilian life behind and enter a new way of life and thinking. You become a member of the Armed Forces. But what about after you separate or retire? What happens then?

After discharge, we belong to yet another category of citizens. We become “Veterans.” Veterans are not military, but we are not civilians either. Society acknowledges a conformational change in our identify from our service in the Armed Forces, an identity that characterizes us for the rest of our lives. And this identity as a Veteran provides the strength required for us to become dedicated advocates for our Right to Keep and Bear Arms.

Having sworn to defend the Constitution in uniform, a Veteran carries the same obligations with him or her into “civilian” life. While other public officials also swear an oath to support and defend the Constitution, Veterans know that our Oath was sealed in blood. Some spilt it, others did not, but all of us understand that this was part of the commitment.

So, when our Constitutional rights are being assaulted by “domestic enemies” on almost a daily basis, Veterans draw strength from the Oath we have sworn and the warrior ethos that defines us. We know what “no-compromise” means because we were and are still willing to give our lives for our country and Constitution. Only the instruments of the battle are changed. Veterans swap the rifle for the pen or keyboard as their primary weapons in the war to preserve our Second Amendment rights. The uniform is hung in the closet in exchange for the business suit as our daily attire when talking to politicians or the media.

But one thing never changes and that is SERVICE. We continue to serve the same cause but in a different manner. Here are just a few ways that you can continue to serve your country as a Second Amendment advocate.

First, just as you received education and training in the military, you need to educate yourself about the political challenges gun owners face today. A good way to do that is to read/watch the daily news, subscribe to pro-gun publications like AmmoLand, and watch high quality YouTube firearms-related channels like Guns & Gadgets.

Second, we all learned discipline in the Armed Forces. Discipline yourself to read and act on the information sent to you from Gun Owners of America (GOA) or other Second Amendment organizations. That means reading emails and taking action when they are sent. It means filling out postcards, writing letters, or calling your elected officials. It’s easier not do any of this, but Veterans know that disciplined action is the only way to ensure success.

Third, enlist or join again! Become part of GOA’s grassroots army that is dedicated to protecting and advancing our Second Amendment rights. Just as the military fights as a team, so does GOA. We need Veteran gun owners to join the cause alongside our civilian counterparts who are also in the Battle for Liberty. And if you are already a member, consider upgrading your membership. Just like troops at the forward edge of the battle area need a supply chain and resources to continue to fight, so do GOA staff and volunteers across the country.

Finally, I want to salute you, my brothers and sisters in arms. You could have retired and lived a quiet “civilian” life, but instead you are heeding the call to serve once again. A call that lays self-interest aside for duty. A call that involves personal sacrifice. And a call that involves something higher than oneself. Please, “carry on.”