Britain Shows Again Why We Are No Longer British

There are a few private gun owners left in England.  What they have to endure shows once again why Americans are no longer British.

To get a gun in England, the burden of proof is on the citizen.  And, no, self-defense is not one of the accepted reasons for wanting to buy a gun.  It doesn’t really matter, because guns have to be kept locked in a safe so they will not be available for self-defense. 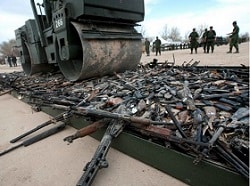 The British law is so rigid that, before granting their Olympic pistol team a special exemption, they had to fly to Belgium for practice.

Breitbart.com ran an article by Andre Walker on October 14 reporting that the Association of Chief Police Officers (ACPO) has kicked off a campaign to make warrantless entry (remember this is the United Kingdom with no Fourth Amendment) into people’s homes and make unannounced inspections.

England has a violent crime rate that is eight times higher than the United States’.  Admittedly their murder rate is quite low, at 1.0 per 100,000.  But then so is the murder rate in Fairfax County, Virginia, where Gun Owners of America is located.  The county has over a million inhabitants and is located in a state where concealed carry permits are easily available.  Nevertheless, Fairfax County has the exact same murder rate as England.

Unlike in England, handguns are easily available in Fairfax County and may be openly carried in a holster.  Not long ago, I was paying for some purchases when a customer walked through the door with a handgun holstered on his hip.  The clerk took notice of it and, unflustered, finished checking me out.

But ACPO doesn’t think the British gun laws are tough enough.  The group has publicly pushed for tighter controls, even though British police are supposed to be politically neutral.

ACPO was rebuked by the leader of an up-and-coming right-of-center party, the United Kingdom Independence Party (UKIP).  The party seeks to withdraw from the European Union, which is governed by unelected bureaucrats who are accountable to no one.

Earlier this year, Greater Manchester Police Chief Constable Peter Fahy publicly rebuked UKIP leader Nigel Farange after he suggested handgun regulations were too tough.  Fahy said: “We should all be grateful that we have got such tight gun control in this country — when you look at the States, it’s awful over there.”

Chief Constable Fahy just reminded us once again why we are no longer British.  Mr. Fahy, we have our Second Amendment to protect us from people like you.

Recent history demonstrates that guns in the private possession of the people have been the tools used to resist tyranny.  During the August, 1946, Democrat primary in Athens, Tennessee, the police walked off with the ballot boxes and took them to the police station.  Armed men with rifles arrived in pickup trucks and automobiles.  A brief firefight ensued, after which the police realized they had better stand down.  They did, and the reform party won – because the votes were honestly counted after all.

More recently, Nevada rancher Cliven Bundy was threatened by a SWAT team from the rogue Bureau of Land Management (BLM).  People spontaneously came to his defense, resulting in an armed standoff.  The BLM stood down.

This is what Chief Constable Fahy thinks is “awful over there.”  Admittedly, dictatorship is much more difficult when dealing with an armed populace.

Larry Pratt is the Executive Director of Gun Owners of America, a grassroots gun lobby with more than 750,000 members and activists.