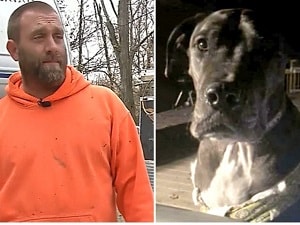 A homeowner in Louisville, Kentucky, used his gun and 150-pound dog to stop an alleged robbery in progress and hold the suspect until police arrived.

The dog’s name is Tank.

According to Fox 5, Derek Thomas was sitting home watching football when he “noticed a suspicious shadow” outside his window. He grabbed a gun, went out to investigate, and allegedly found 25-year-old Matthew Conklin rummaging through his truck. Thomas fired two warning shots and ordered Conklin to the ground.

Conklin complied, after which Thomas called for his wife, who brought Tank out of the house.

He said “(Tank) started barking and going crazy.” Thomas then looked at Conklin and said, ‘You hear that? That’s my 150-pound dog. And I promise if you run, I’m not chasing you – but he’s going to catch you.”

RELEASE: GOA Sends Open Letter to GOP to “Do Something” on Pro-Gun Bills