Gun rights activists are claiming victory after the Trump administration withdrew new guidance that could have effectively outlawed stabilizing braces, which resemble gunstocks and attach to pistols to steady the shooters’ aim. 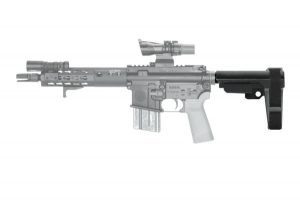 The Bureau of Alcohol, Tobacco, Firearms and Explosives (ATF) had said the devices can transform pistols into short-barreled rifles subject to federal regulation and taxation — a perpetual fear of gun owners.

But after significant outcry from members of Congress and others, the agency withdrew its notice for public comment on the guidance less than a week after publishing it…

The ATF said it was trying to set clear rules so people wouldn’t be unwittingly caught breaking the law. But gun rights groups said the administration appeared to be searching for ways to outlaw legally-purchased devices.

“Gun owners will have to stay vigilant, as no doubt, the ATF might try to reimpose similar regulations next year,” Mr. Pratt said….

The ATF acknowledged that there are legitimate uses for the devices.

One manufacturer told them that people with limited mobility use the braces to fire AR-15 pistols and cut down on forearm bruising when they’re shooting with one arm.

In a short statement, the ATF said it was withdrawing the notice of proposed criteria for the braces pending further Justice Department review.

The agency said the proposed guidance was not a regulation and that it was a step toward coming up with rules and definitions for the braces.

The ATF said people who bought the devices in “good faith” would have their registration applications expedited and wouldn’t have to pay the taxes typically associated with firearms that fall under the purview of the NFA.

Mr. Pratt had sarcastically applauded the Trump administration for agreeing to waive the tax.

“What a compromise,” Mr. Pratt said. “Honest gun owners get to add themselves to the ATF’s national gun registry, and the ATF won’t charge them $200 to do it!”