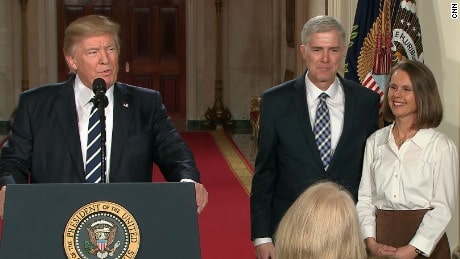 GOA Legislative Counsel Michael Hammond said any senator who opposes Gorsuch can say goodbye to their pro-gun credentials in their next election.

Advocates for and against gun control agree on this much: Supreme Court nominee Neil Gorsuch is a “pro-gun” judge and the proof is a 2012 court case in which he sided with a felon busted with a gun.

As a Circuit Court judge, Gorsuch found an unusual argument in that case compelling: The felon said he didn’t know he was a felon, and was thus unaware that he was barred from having a gun.

Gorsuch argued the law requires the government to go beyond prior precedent and prove the defendant knows he’s a felon — not just that he knew he had a gun.

Gun-rights advocates say his role in U.S. v. Miguel Games-Perez proves his deep commitment to the Second Amendment, and they plan to fight for his confirmation. Gun control supporters say Americans should be concerned that he won’t even restrict gun rights for convicted felons….

Michael Hammond, legislative counsel for Gun Owners of America, said he helped draft the Firearms Owners’ Protection Act as a Senate staffer in 1986 and insisted on inserting the word “knowingly” in the bill. Gorsuch, he said, correctly interpreted Congress’ pro-gun intent.

“He was the one member of the 10th Circuit who knew the pro-gun meaning of the statute and was able to take two pages to explain it,” he said. “It made a conviction harder because you had to prove the person knew they were acting in violation of the law.”

Hammond said any senator who opposes Gorsuch can say goodbye to their pro-gun credentials in their next election.

“We will make sure that we spend the next two years ensuring that anyone who votes to keep the seat open until a Democrat can appoint an anti-gun person to replace Scalia is viewed as anti-gun,” he said.

[VIDEO] Imagine Seeing This At Your Front Door While You’re Home; This Homeowner Was Armed And Fired Shots