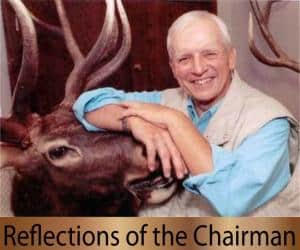 It usually works that way in the movies, especially if the hero happens to be Clint Eastwood, John Wayne or Harrison Ford. But in real life? Often in politics there isn’t a choice. Sometimes you are given the selection between Republican candidate Yuck and Democrat Burp.

Case in point:  November 6, 2008.  The sun shone brightly on Washington DC, but over the Republican National Headquarters, there hung a little gray cloud of gloom.  “What happened?” asked the “insider” Republican strategists. “We had the issues, the money and all the paraphernalia necessary for victory. We thought we had a ‘Big Tent’ winner but it turned out to be a Big Tent Bust!”

The Republican Washington, DC insiders thought they had a candidate who had it all. He was considered a war hero, a maverick, a United States Senator and a household name – one who was constantly on national TV and in the mainstream news. His mascot was one of the most powerful of the African animal species and his opponent’s mascot was a jackass – a rhino against a donkey – how could the Republican possibly lose?

And lose he did, big time.

Could it be that the sizable conservative base of the Republican Party wasn’t pleased with McCain? The “big tent” theory hadn’t worked. Could it be that the poles that held up the big tent were the conservative activists? Aren’t they the volunteer workers, poll watchers, drivers of elderly to the polls, and precinct walker activists — namely, the ones who turn out the vote?

However, in the primary selection, McCain wasn’t their choice. McCain was picked by the national media [who knew he would lose] and the Washington insiders [who were clueless].

Somewhat consoled by Sarah Palin’s selection as the vice presidential candidate, some conservatives got off the couch and voted for McCain as an afterthought – but, they didn’t work for him and didn’t tell their friends if they did.

The Democrat choice was Obama, the most radical Senator of them all. The Democrat National Convention had previously selected liberal Senators, such as Humphrey, McGovern, Mondale, Kerry and Gore – and all had lost by comfortable margins. Why should 2008 be any different?

Obama ran a slick campaign around the word “Change!”  And then he changed opponents. Obama forgot McCain existed and campaigned against President Bush. The mainstream media swooned over Obama’s every word as they had swooned over getting McCain nominated in the primary – then they forgot he was alive. The race was over before it began. In fact, can anyone even remember what McCain’s lackluster campaign even stood for?

So, in all good conscience, many conservatives put two and two together and figured it was like choosing between two political rashes, some couldn’t vote for Obama and had little itch to vote for McCain. So to sum it up, some voted for McCain, some stayed home, some didn’t care and that’s the total sum.

The fact is, in 2008 the mainstream media had picked both candidates from the very beginning — Candidate Yuck and Burp. The left was organized in the primaries and the conservatives were not. The fact is, you can’t win something with nothing. Good guys have to win primaries before they can win in the general election. Winning takes organization, determination and leadership IN THE PRIMARIES. Over the last fifty years, the radical left has finally taken over the Democrat Party by winning primary races first. Therefore, the hard left has been able to gain control of the leadership of both houses of Congress by 2006 and the presidency in 2008. Is it any wonder the next two years got really ugly?

Many Americans finally got peeved, organized and downright mad. Little did anyone realize that Americans of both parties had unintentionally voted for having a giant tea party. Two years later in the 2010 elections, both political entities found out that the tea that had been brewing was really hot … and not about to cool off! Many of the Tea Partiers were politically green as grass in 2008, but they were smart enough to know that two plus two equaled four and that organization was a critical part of the elective equation, so they organized.

So, now we’re looking at the presidential race in 2012. Obama looks vulnerable and a number of Republican hopefuls have tossed their hat in the ring. And, the mainstream media is at it again, trying to tell us that another candidate Yuck is the best of the Republicans to oppose President Burp. Surprise, surprise, the Washington Republican insiders seem to agree with the mainstream media.  Isn’t he the best debater? Wasn’t he the beloved executive governor of Massachusetts? So far we haven’t heard a real negative note from The New York Times or The Washington Post on this perennial leader in the polls.  And, as an afterthought, we’ve been told that any conservative in the race don’t stand a chance.

Conservatives should know by now that the Republican that’s been the most viciously attacked by the media is probably the best Republican candidate:  one that is pro-gun, pro-family, pro-life, pro-Constitution and pro-God.

We gunners know that if Republican Yuck wins the primary instead of a rock solid conservative, we’ll be hunting in November and the Republican conservative base will be back on the couch watching football instead of turning out the vote. The result will be the same as 2008, and America will be inundated with teleprompter Burp for four more years, that is, if America can last that long.