While the liberal state of Washington enacted universal background checks (via I-594) on Election Day, voters did so in a very underwhelming fashion.

“For years, anti-gunners like Michael Bloomberg have told us that 90% of the American public support universal background checks,” said GOA Director of Communications Erich Pratt.  “But now we see it was all a lie.”

In recent years, polls have supposedly shown that 85% of gun owners — and 90% of the American public — support universal background checks. 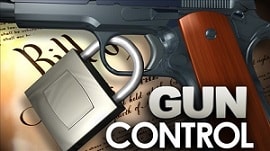 “But in liberal Washington state, even with billionaires like Michael Bloomberg and Bill Gates pouring millions of dollars in support of I-594, the initiative mustered only 59% of the vote,” Pratt said.

In fact, a Gallup poll last month showed that 52% of all Americans oppose more stringent gun controls of all kinds — including policies like universal background checks.

“Two of the largest and oldest police organizations in Washington — and 70% of the sheriffs — opposed I-594,” Pratt said.  “This tracks with other polls, such as the PoliceOne.com poll from last year which showed that police, by a two-to-one margin, support concealed carry for private individuals over expanded background checks.”

(2) Armed Americans are the best antidote to crime.

“According to the PoliceOne.com survey from last year, 80% of police believe that armed individuals would reduce casualties associated with mass shootings,” Pratt said.

“In the gun control ‘utopia’ of Canada, a gunman with a long criminal record was not prevented from using a rifle to kill an unarmed soldier and shoot up the Parliament,” Pratt said.  “And in Washington State, a student recently used a handgun that was already present in his home to shoot up his high school.”

In the lead up to the November 4 vote, GOA produced a Fact Sheet in opposition to I-594 and issued several alerts into Washington — including ones here and here. GOA is opposing Michael Bloomberg’s efforts to enact similar ballot measures (to I-594) in additional states in 2015 and 2016.

Erich Pratt is the Director of Communications for Gun Owners of America, a national gun lobby with one million members and activists.