Congress is trying to pass a bill to allow the federal government to pressure people to give up their Second Amendment rights in the name of suicide prevention. At the same time, newly released documents show multiple federal law enforcement agencies have effectively done this to people without congressional approval. 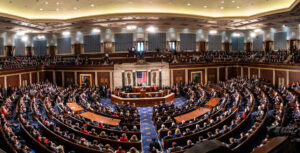 On Thursday, Gun Owners of America (GOA), put all its evidence online that shows the Federal Bureau of Investigation (FBI) has permanently disarmed people. The gun rights group is lobbying on Capitol Hill to stop this practice from being codified.

The bipartisan bill called the “Preventing Suicide Through Voluntary Firearm Purchase Delay Act” passed the Judiciary Committee last week. It says the FBI would create a new database for people who volunteer to be blocked from buying or possessing a gun. The “delay” in the bill title refers to the period from which the person put themselves into the database and potentially subsequently took themselves out of it…

The House bill would upend federal background check gun law by making it arbitrary who loses the right to own or buy a gun. Under current law, a person is prohibited from buying or owning a firearm for mental health reasons only due to being adjudicated as mentally defective or involuntarily committed to a mental institution. The House bill makes it so people in this new FBI database who have not experienced these situations would still be committing a federal crime by possessing a gun.

“I’d like to make sure this bill in Congress doesn’t become law—lest it be weaponized against the American people,” Aidan Johnston, GOA’s director of federal affairs told The Epoch Times.

“The very existence of a bill to codify what the FBI was already doing proves the FBI had no authorization from Congress to carry out this program,” said Johnston. The GOA’s released records showing the FBI has forced 23 people to permanently sign away their rights to own a gun, and the agency has still withheld documents in the ongoing Freedom of Information lawsuit.

“Congress should be punishing those bureaucrats who abused it instead of codifying the program and the unconstitutional behavior,” said Johnston…

The move on Capitol Hill came at the same time as the FBI released more documents to the GOA, as first reported by The Washington Examiner, Emails show the U.S. Secret Service and the Immigration and Customs Enforcement (ICE) sent signed forms to the FBI in which people who allegedly have mental health problems signed away their right to have a gun for the rest of their lives…

The internal document sent between the agencies is called the “NICS index self-submission form.” By signing the form, the person agrees to “denial of my right to purchase, to possess and to use any firearm.” It also says the signature means that once the person is in the so-called NICS index, he or she “may not be permitted to withdraw my name or information.”

Along with the emails from the other agencies, the FBI released eight more completed forms which all checked the box to agree they had a mental health condition that caused them to be a danger to themselves or others. The FBI will not say how many people have been put into the background check system without violating any federal laws.

“We’d like to see these people who are not prohibited people removed from the NICS database. The federal government had no authorization to disarm them and take away their Second Amendment rights,” said Johnson. The FBI did not respond to multiple requests for comment about the program.

The agency has been slow-walking the release of these documents from the program that supposedly stopped in 2019. The agency wrote in the latest release to GOA’s attorney Robert J. Olson that the new tranche was just 16 of the 22 pages reviewed. While the widespread federal law enforcement effort is alarming, the current bipartisan effort to make an unofficial and illegal policy into federal law is a more serious blow to the inalienable right to keep and bear arms.