GOA’s Michael Hammond: When I Was 17…

The breaking point came when an MSNBC commentator asked what I, the TV viewer, was doing when I was the same age as the loquacious and petulant children who gathered at the Mall Saturday.

When I was 17, I had an ROTC-issued semi-automatic M1. And, as a high school senior, I had been training for 3 years already to fight in a pointless war in Vietnam where 57,000 of my classmates died — at the behest of Lyndon Johnson, the father of American gun control. If one in three attendees at Saturday’s “food fight” had been shot dead, it would have been comparable to the loss which my generation suffered.

And yet drooling Big Media treated us to spoiled brats from states like California — states which have already banned semi-automatics — who had no problem spending a sunny Saturday afternoon whining about how scared they were to go to school.

In this event, children paraded around in designer T-shirts paid for by millionaires and billionaires. But the kids who were bright and mature enough to resist the anti-gun indoctrination — and their shot at 15 minutes of fame — were purposefully excluded. 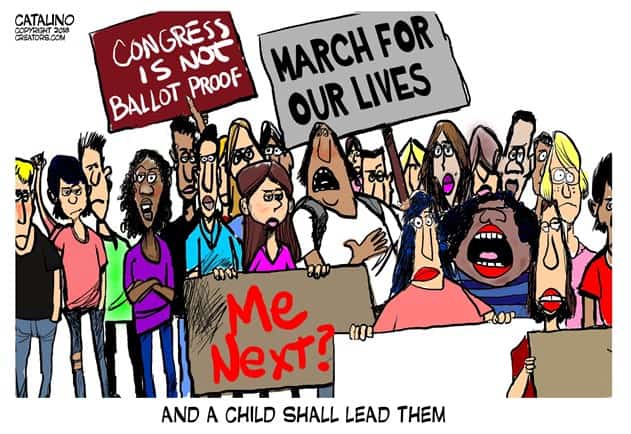 The ones who were showcased were the same kids who went up to Tallahassee and convinced pliant Florida legislators that their little brains were too immature to own a gun. A month later, it appears their tiny brains had grown — and were more than big enough to seize power from their moms and dads — and strip them of their constitutional rights.

These Parkland Puppets didn’t, alas, have the maturity to form original thoughts. They parroted the talking points of the Bloomberg and Giffords’ organizations, babbling on, for example, about the number of Americans “killed daily by gun violence” — and neglecting to mention that a large majority of these casualties pulled the trigger themselves and put the bullets into their own heads.

The fact is that the Feinstein ban on semi-automatics — which grandfathers 50,000,000 guns — would not have stopped the Parkland massacre. Given that over a hundred police and school interventions found the shooter to be a “low risk,” Florida’s new gun confiscation orders wouldn’t have done any good either.

In fact, the people who might have stopped “Parkland” are the people on the ground: the FBI and school administrators and local law enforcement, who ignored the danger and, in some cases, hid when the bullets started flying. And, yes, at least some of the blame goes to the kids who now proclaim they “knew” Cruz would shoot up the school — and want to blame a hundred million gun owners for the fact that he did.

Saturday’s children did send their message loud and clear. And they did so on the eve of a seminal election which will be decided on the gun issue.

Unfortunately for them, it will be decided not in Washington or New York or Chicago or Los Angeles or San Francisco or even Bombay. It will be decided in Bismarck and Billings and Terre Haute and Wheeling and Columbus and Kansas City. And people from all of these places now understand that, yes, they do want to take away your guns. And I didn’t see a whole lot of them there.