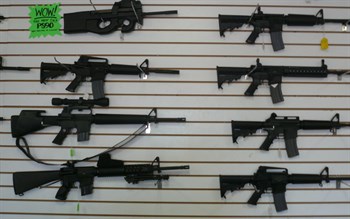 A gun-rights advocate says passing a new law to increase background checks won’t keep firearms out of the hands of bad guys.

The bi-partisan bill comes in the wake of the church shooting in Texas, in which the shooter had had a series of run-ins with the law, including in the U.S. Air Force where he served jail time for domestic violence.

The new bill would punish agencies that fail to report their records on domestic violence to the National Instant Criminal Background Check System, or NICS, which screens gun purchases from licensed firearms dealers.

“That forces law-abiding citizens to prove their innocence to the government,” he argues, “before they can exercise a constitutional protected right. And we think that’s wrong.”

“In all these and more,” says Pratt, “the killers passed background checks, and if they couldn’t they would steal their firearm like the Sandy Hook shooter.”

Pratt says he agrees with Texas Attorney General Jim Paxton who has said a better response to the church shooting would be more armed citizens fighting back, not more gun restrictions.

This church has a warning for visitors: ‘WE ARE HEAVILY ARMED — The Pastors’