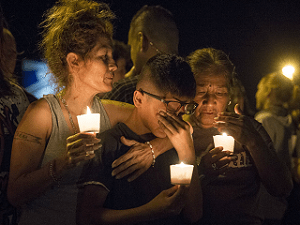 Pratt observed, “The shooter passed background checks, and he was denied a carry permit. However, these gun control measures—even with the denial of a carry permit—did not prevent the shooter from carrying out his evil act.”

The GOA release comes one day after Devin Kelley opened fire on congregants at the First Baptist Church in Sutherland Springs, killing 26 people. The attack was stopped by an armed citizen who ran to the scene with his AR-15 rifle in hand and shot Kelley as he exited the church.

Pratt wrote, “Gun Owners of America grieves at the senseless attack on churchgoers in Sutherland Springs, Texas. The evil which would cause even a demented individual to open fire in a church is incomprehensible to any sane mind. Our thoughts and prayers certainly go out to the victims of this horrific tragedy.”

Pratt then observed that Senate Democrats launched into their “war chant” for more gun control only hours after the attack occurred, and he pointed out that they did so without stopping to realize that more laws would not have done anything.

He observed, “The shooter passed background checks, and he was denied a carry permit. However, these gun control measures—even with the denial of a carry permit—did not prevent the shooter from carrying out his evil act.”

But an armed citizen did what gun control did not. He “engaged and chased the shooter” and “[ended] the threat.”  That armed citizen, Stephen Willeford, is credited with saving “countless lives.”

Pratt suggests the lesson is clear—House Speaker Paul Ryan (R-WI) needs to allow national reciprocity for concealed carry to come up for a vote so law-abiding Americans can be armed wherever they are for self-defense.

He said, “If there is any message to be learned from this, it is that Congress and the state legislatures need to disabuse themselves of the notion that passing more gun control laws will somehow make Americans safe. GOA continues to urge Congress to pass H.R. 38 which, among other things, would further encourage law-abiding Americans to carry guns with them.”