Get in the Fight to Stop Red Flag Gun Grabs

Take Action below to EMAIL your state lawmakers to OPPOSE Gun Confiscation Orders in all forms!

Red Flag Proposals CAN be Defeated, but Only if You Act!

So-called “Red Flag Proposals,” properly know as Gun Confiscation Orders, are making their way into practically every state capitol in the country.

This is perhaps the most dangerous gun control proposal to come out of Michael Bloomberg’s playbook. 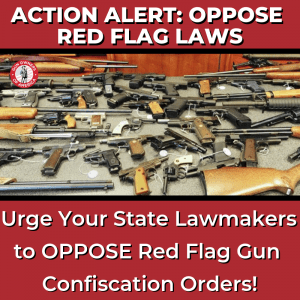 These proposals generally begin with the police or an ‘angry ex’ making a telephone call to a judge. And, based on that telephone call, the judge can issue an order stripping you of your Second, Fourth, Fifth, and Fourteenth Amendment rights.

With no actual hearing and no due process whatsoever.

Now, many of the proposed bills would allow the judge to suspend constitutional rights by a lowly ‘preponderance of the evidence’ — a standard far below proper due process.

When the accused is the only one on the line, the judge will normally sign anything placed in front of them.

Thus, armed with the rubber-stamped revocation of the Constitution, the police will normally arrive at your door in the middle of the night, ready to ransack your home and, if you resist, to arrest or kill you. As they did in the case of Gary Willis.

So, not only do these Red Flag Gun Grabs throw your Constitutional rights out the window, they’re completely ineffective at stopping mass shooters.

We know that gun confiscation was in place in California at the time of the Thousand Oaks shooting in November. Connecticut also had a red flag law enacted at the time of Sandy Hook massacre in 2012.

Not surprisingly, these gun control laws are never, ever successful in identifying the next mass shooter.

In fact, researcher John Lott found that these Gun Confiscation ‘red-flag’ orders had absolutely no effect in the states where they were law — except, maybe to INCREASE the incidence of rape.

Rather, it is just the next step in taking away your guns without due process for no real purpose.

In essence, Red Flag Gun Grabs are some of the most onerous gun controls.

But the good news is that they can be defeated, but only if gun owners are vocal!

It’s time for Second Amendment supporters to be active; attend committee hearings at your state capitol — contact your lawmakers — and get your pro-gun friends and family to do the same.

So please use the form above to urge your lawmakers to reject Red Flag Gun Grabs in ALL forms!