These comments are filed on behalf of Gun Owners of America, Inc. (“GOA”), a national membership education and lobbying social welfare organization, 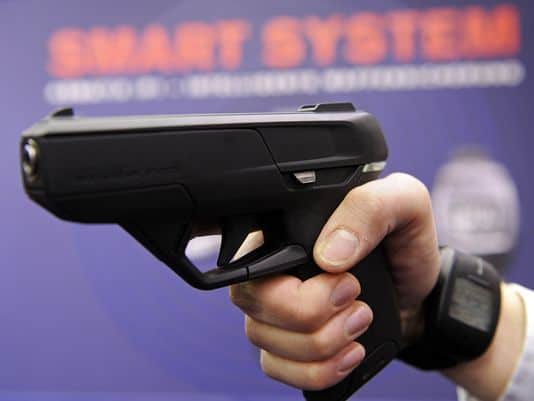 devoted to protecting and defending firearms rights across the country.
GOA was incorporated in California in 1976 and is exempt from federal tax under section 501(c)(4) of the Internal Revenue Code (“IRC”).

In response to the request by the Justice Programs Office on July 15, 2016, GOA submits these comments on the notice entitled “Draft Baseline Specifications for Law Enforcement Pistols with Security Technology.”

The essence of our comments is that the proposal by the Department of Justice (DOJ) is a politically-motivated misuse of government resources in aid of a political campaign. If not illegal, it is unethical and unconstitutional. The result of their implementation would be that law enforcement personnel would be put in needless danger, and that an unspecified number of police would die in order to accomplish this political agenda.

1. The Justice Department’s Proposal is a politically motivated Misuse of Taxpayer Dollars in Aid of a Political Campaign.

No one is fooled by the motivation of the DOJ’s actions.

They spring from Barack Obama’s address of January 5, 2016, which specifically called for them.

Obama’s address, in turn, was a response to a shooting in San Bernardino on December 2, 2015, in which 14 people were killed at a special services center.

The shooter pledged allegiance to ISIS, and yet Obama’s response was not directed at ISIS, but rather at law-abiding gun owners.

The shooting took place in one of the most draconian gun control states in the country, and yet Obama’s response was not directed at whether an armed citizenry could have staunched the terror, but rather at further disarming law-abiding gun owners.

The shooter was a Muslim with a radicalized imported Islamic wife, motivated by his perverted interpretation of his faith, and yet, Barack Obama refused to use the words “radical Islam,” and instead directed his wrath at over 100,000,000 innocent law-abiding Americans who are gun owners.

Make no mistake about it:  A smart gun wouldn’t have stopped the San Bernardino.

A gun ban on persons on the “no-fly” list or who have been investigated by law enforcement within the last five years wouldn’t have stopped the San Bernardino shooting.

An armed civilian in the San Bernardino services center, on the other hand, could have stopped the shooting.

However, a pro-Second Amendment message would not be of assistance to Hillary Clinton’s presidential campaign, which has negatively targeted the lawful ownership of guns in America — and the scapegoating of law-abiding Americans for the gross law enforcement failings of the current administration, in which she served.

2. Everyone understands that the Motivation of the DOJ Proposal is to Ultimately Outlaw All Guns Currently on the Market.

The DOJ is not fooling anyone with respect to its motivation for making this proposal.

The goal is, pure and simple, to ultimately outlaw guns which fail to comply with the DOJ’s “smart gun” standards.

New Jersey made this clear when it enacted legislation to impose a ban on currently marketed firearms as soon as “smart guns” came on the market anyplace in the country.

It prohibits any old or new firearms which do not comply from “being sold or offered for sale by any registered or licensed firearms dealer…” This, incidentally, comes at a time when Obama’s “universal background check” proposal is trying to outlaw private sale between individuals.

When New Jersey’s gun ban was used as an argument for boycotting “smart guns” elsewhere in the country, the sponsor of New Jersey’s gun ban tried to negotiate with pro-gun advocates. But she had violated a fundamental rule of hunting: She had sprung the trap before the prey had taken the bait.

If the Justice Department acts on this proposal — and even if the federal government fails to enact “smart gun” laws — we suspect that virulently anti-gun states like California, New York, Connecticut, and Maryland will pass similar anti-gun laws. And, as with “microstamping,” these states will attempt to put pressure on gun manufacturers to make only guns which can be sold in these large markets.

The resultant attempt to phase out guns currently on the market is obvious — and intended.

3. “Smart guns” Will Not Be Readily Accepted by the American People.

In a poll conducted by the National Shooting Sports Foundation — the trade group composed of the manufacturers who would actually have to sell the unpopular guns — 74% of respondents said “smart guns” would not be reliable at all, or not very reliable.  An even larger percentage of respondents (81%) said they would not buy, or not be very likely to buy, such a gun.  And 7 out of 10 persons just flat out said the government should not mandate the use of “smart gun” technology.

There are obvious reasons for that: Americans know what it’s like to have their computer crash or their local ATM to be “out of service.” They understand that, if this happened to their gun when they were facing an armed intruder in the middle of the night, they would die. And their family would likely die, also.

They intuitively understand what we will discuss in more detail in the next section: Guns which rely on “smart gun” technology are inherently unreliable.

They also presumably understand that organizations like the Department of Justice, which promote this technology irrespective of its reliability, will not tell them the truth about the likelihood of whether their gun will fire in a life-or-death situation.

What they may not understand is that unreliability is only one aspect of the Justice Department’s efforts to promote this technology in order to discourage gun ownership.

Gun rights author, A.W.R. Hawkins, reviewed the heavily publicized Armatix IP1 “Smart Gun.” It turns out that this gun, which would have triggered New Jersey’s statutory gun ban, costs $1,800, and is available only in a .22 long rifle. This, in Hawkins’ words, “is a measly round for self” defense.”

The Armatix IP1 has also been attacked for its color (grey, “indistinct and hard to see”), its bulkiness, the bulkiness of its accompanying watch, its difficulty to clean, and the potential problems which could result from its gun/watch concept. In a “test firing,” it took ten seconds, multiple presses of two separate buttons, and the entry of what appeared to be a four-digit PIN code. In any realistic situation, an owner who tried to use this gun for self-defense would die.

We understand that the intention of the Department of Justice is to make firearms expensive and unattractive to purchase. But the Obama administration should not operate on the assumption that anyone is fooled by the DOJ’s devious intentions.

4. “Smart guns” Are Unreliable in Any Situation Where They Are Likely to be Used — and Therefore Will Result in Extensive Police Causalities If Used by Law Enforcement.

There’s no question that Barack Obama has shown contempt for men in uniform — both in law enforcement and in the military.

At a police funeral in Dallas where five officers where tragically murdered, Obama blamed the anti-police violence, at least in part — amazingly enough — on the police who were killed!

Obama didn’t serve in the Army himself, and his obsession with turning the U.S. armed forces into an exercise in political correctness has, while he was dithering, allowed a terrorist state to occupy a large segment of the Middle East.

In an effort to turn the military and law enforcement into experiments in gun control, Obama now, through the current Justice Department effort, proposes to arm them with experimental, politically correct weapons which may or may not fire in an emergency — and which will unnecessarily endanger the lives of America’s police and fighting forces.

The Justice Programs Office’s notice, Draft Baseline Specifications for Law Enforcement Service Pistols With Security Technology, would begin the process to ultimately force men and women in the military and law enforcement to do their jobs with “smart guns” — guns which don’t differ from regular guns, except that they may or may not operate, when confronted by an armed criminal or an enemy force.

The proposal contains the obligatory bow to not “compromise[e] the reliability, durability, and accuracy that officers expect from their services weapons.”

But as anyone knows, if they have ever had problems logging onto their iPhone using fingerprint technology, technology is not perfect — particularly “recognition technology.” And the police and the military need guns which will — reliably and without question — perform their function IMMEDIATELY.

What if law enforcement personnel (or military personnel) are attacked while asleep and not wearing the “smart gun” wristwatch? Or if they don’t have time to punch a code into a keypad? Or if they are not holding the gun in such a way that it can read their fingerprints?

In all of those cases, the result is yet another police fatality.

So the question is: How many dead police are acceptable “collateral damage” in Barack Obama’s gun control agenda? A thousand? A hundred? Fifty? Thirty? Fifteen?

We already know that the number is more than “five.”

Obama comes along and tells the Army that, in this administration, money is going into small arms to build — not a deadly weapon, not an effective weapon, not a dominant weapon, not a lifesaving weapon, not      a technological cutting-edge weapon — but a weapon that prevents accidental discharge.

For all of these reasons, we demand that the Justice Department withdraw from this effort to endanger America’s law enforcement personnel by pushing ahead with “smart gun” technology.