FEDERAL COURT: NO, ATF, BUMP STOCKS ARE NOT MACHINE GUNS

A three-judge panel of the U.S. Sixth Circuit Court of Appeals on Thursday rejected the legality of a 2018 rule change by federal regulators that reclassified bump stocks as illegal machine guns. 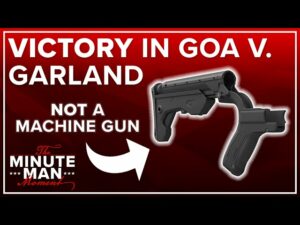 The Circuit, which controls Kentucky, Michigan, Ohio, and Tennessee, handed down a 60-page opinion in the case of Gun Owners of America, Inc. v. Merrick B. Garland this week. The crux of the issue to the court was that the ATF – effectively part of the executive branch of government – enforces laws rather than makes them, with that authority reserved for the people acting through their elected representatives in Congress.

“Congress could amend the statute tomorrow to criminalize bump-stock ownership, if it so wished,” said Judge Alice M. Batchelder for the majority, which was joined by Judge Eric E. Murphy. “But as judges, we cannot amend [the statute]. And neither can ATF. This is because the separation of powers requires that any legislation pass through the legislature, no matter how well-intentioned or widely supported the policy might be.”

Batchelder is a 1991 appointment to the federal bench by President George H. W. Bush, while Murphy, Ohio’s former solicitor general, was appointed in 2019 by President Trump.

Ironically, it was the Trump-era ATF that moved to reclassify bump stocks as machine guns three years ago. The rule was a reversal of the agency’s longstanding interpretation that the devices were not, in fact, machine guns. At the time, one of the most vehemently anti-gun lawmakers on Capitol Hill, U.S. Sen. Dianne Feinstein, D-Calif., said plainly, “Until March 2018, ATF maintained that bump stocks could not be banned through administrative action. Legislation is necessary to ensure a ban is implemented and regulations are not tied up in court.”

A key facet of the court’s opinion this week was that the action of a bump stock still requires a trigger to be pulled for every shot, an argument advanced by numerous vocal opponents to the ATF’s rule change.  …

The ruling in the case, whose plaintiffs included three bump stock owners and three pro-2A groups, was hailed as a win for gun rights.

“Today’s court decision is great news and told gun owners what they already knew,” said Gun Owners of America Senior Vice President Erich Pratt, whose group is seeking an injunction to prevent ATF from enforcing its bump stock rules. “We are glad the court applied the statute accurately and struck down the ATF’s illegal overreach and infringement of gun owners’ rights.”

Bump Stocks Are Not Machine Guns And They Never Were