Fast and Furious Bombshell: Has Eric Holder Been Caught Lying to Congress?

CBS News, which already found evidence that ATF Special Agent in Charge BillNewell lied to Congress when describing his contact with White House National Security staffer Kevil O’Reilly, kept digging through the documents dumped by the White House last Friday, and found a much bigger story lurking among the emails: what appears to be evidence that Attorney General Eric Holder lied to Congress, in response to a direct question. 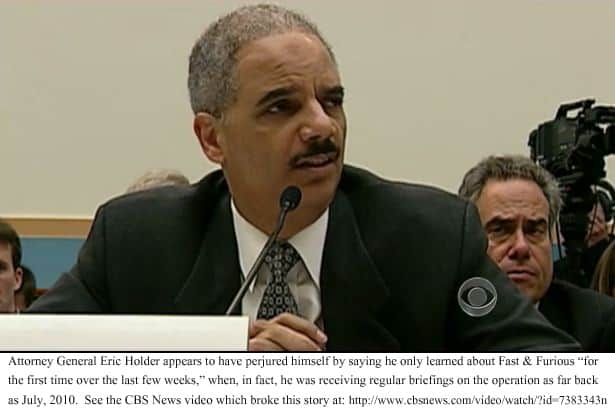 New documents obtained by CBS News show Attorney General Eric Holder was sent briefings on the controversial Fast and Furious operation as far back as July 2010. That directly contradicts his statement to Congress.

On May 3, 2011, Holder told a Judiciary Committee hearing, “I’m not sure of the exact date, but I probably heard about Fast and Furious for the first time over the last few weeks.”

(Emphasis mine.)  These documents are very specific about the nature of the gun walking operation, and they do use the name “Operation Fast and Furious,” according to a Fox News report:

The Obama Administration Is At It Again