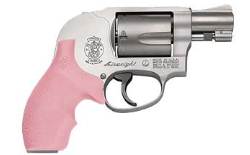 When the “modern” handgun was introduced by Colt in the late 1800s, it became known “as the great equalizer.” This 19th century observation proved true yet again last week when a 110-pound former beauty queen shot and killed a violent thug who broke into her Florida home at three o’clock in the morning.

Meghan Brown, responding to a knock on the door, was overtaken by ex-convict Albert Franklin Hill and forced to an upstairs bedroom. The victim’s fiancé, Robert Planthaber, was awakened by the commotion and went after the attacker.

Planthaber told FoxNews.com that he “took a severe beating to the head…But I got him off of her long enough for her to scramble to the room where she keeps her pink .38 special.”

Brown retrieved the firearm and shot Hill several times. The intruder, who was pronounced dead at the scene, had a criminal record that included four prison sentences.

Bloomberg should end his journey in Florida, at the home of Meghan Brown.This is a side of gun ownership that rarely makes the news. And, true to form, the mainstream media has largely ignored this case. Criminals using guns is front page news; armed citizens fighting back just doesn’t fit the storyline.

And this incident is hardly unusual. Studies by government agencies, criminologists and economists show that citizens use firearms to defend themselves anywhere from 600,000 to 2.5 million times per year to thwart crimes. The facts show that firearms are used most often to protect the innocent many against the dangerous and violent few.

You will not hear this story touted by New York City Mayor Michael Bloomberg. The mayor and his anti-gun group, Mayors Against Illegal Guns, is currently sponsoring a nationwide tour to make it harder for the good guys (and gals) to purchase firearms.

Bloomberg’s mobile billboard proclaims that “34 Americans are murdered with guns every day.” But where is the calculation of how many lives are saved each day because law-abiding citizens have access to firearms? More importantly, how many lives will be lost if Bloomberg is successful in pushing yet more gun control laws in this country?

The Mayor will end his “Tour of Lies” in Tucson, seeking political gain from the tragic Arizona shooting in January. But if he wants to paint a truer picture of gun ownership, Bloomberg should end his journey in Florida, at the home of Meghan Brown.

This case could have easily gone bad for the victims—instead of bad for the criminal—if the law prevented Ms. Brown from receiving a pink pistol for Christmas last year.

All that was left for the police to do when they arrived was to cart away the body. It was the “great equalizer” that empowered Meghan to effectively defend her home and save the lives of two would-be victims.