January 17, 1989. Cleveland Elementary School. Stockton, CA. A day that forever changed my life and the lives of many others. That morning, as a 7 year old boy, I lost part of my innocence. I learned the cold, harsh reality that your life can be taken within a moment’s notice. 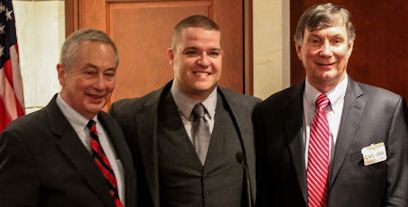 The time came for morning recess, and I was ready! We started our game on the painted kickball diamond that laid across our blacktop. I remember being so excited. In a matter of seconds our fun came to an abrupt end when my classmates and I noticed a burning car parked a few dozen yards from where we were playing our game.

The flames drew many of the kids like a porch light attracts moths. Children often run towards things that look exciting, not realizing the danger that something like a car fire poses.

I didn’t run towards the car, like many of the others. I didn’t have a chance. The driver of that car, the coward who set the fire, began to open fire on my classmates and me. Patrick Purdy was able to walk onto our campus with a Chinese version of the AK-47.

What was supposed to be a fun game of kickball, turned to sheer panic. I did what I thought I was supposed to do, and ran towards my classroom. I still did not comprehend the evil that was taking place as I tried to get back to a place of safety.

I remember what it sounded like, as the bullets flew past my body. I remember the feeling of my feet literally being swept out from under me as a round traveled through my right foot. I remember the slap of the round that hit the pavement an inch or so in front of me, prior to lodging itself in the left side of my chest.

I remember the difficulty of standing to my feet, and making it to the wooden handball wall that stood in the middle of our blacktop. I still remember the wood exploding above my head as more rounds pierced the wall, inches from my face. I’ll never forget the cold-eerie silence after making it back to my classroom, hearing the last gunshot, a self-inflicted shot to the head which ended Patrick Purdy’s life.

The realization of what just occurred set in, and that was when I lost it. I’ve never felt so afraid in my life. The cops could not get there fast enough. It felt like hours before the first officers arrived, and we knew that we were finally safe. No child should ever feel what I felt that day. No one should ever feel the pure terror of what took place that January morning. Five kids were killed, 27 were injured, and an entire nation lost the sense of security of being able to send their children to school and having them be safe.

You may be hearing my story, and thinking to yourself that “more gun-control” is what needs to happen. You are not alone in that belief. It seems like that is all we hear after incidents like these. But let me be the one to tell you. Gun control is NOT the answer. Gun control would not of saved me or any of my classmates that dreadful day.

What happened to us on that schoolyard is horrific, we can all agree on that. However, what the psychopath wanted that day, the need to hurt and kill, could and probably would have happened whether he was armed or not. A firearm is just the avenue that he chose to go down.

If you look at past incidents — such as the Oklahoma City Bombing, the attacks of Ted Kaczynski, etc. — the results were horrific. When you take tragedies such as these, the common denominator is never the weapons used. We miss the mark when we, the outsiders, begin to dissect the incident in question. In all of these attacks, the common denominator is the attacker, not the weapon.

Going through what I went through as a kid, most would think that I would blame the weapon. I guess I differ than some of you. I HAVE NEVER BLAMED THE FIREARM! I guess I got it, even as a youngster. My attacker was the only person to blame. He chose to do what he did that day, and he would of merely chosen another way to do it if he was not armed. The possibilities are endless.

Let me ask you a question: Is it the vehicle’s fault when a drunk gets behind the wheel and takes out an innocent person? Should we now place a ban on vehicles? That would be nonsense! So why call for more gun control? I will tell you now that this is not the answer. There is nothing good that will come of it. To strip Americans of a fundamental right to bear arms, or even the types of weapons we choose is absurd. The only people who will be affected are the many law abiding citizens who choose to protect themselves against evildoers.

In early 2004, I raised my right hand and swore an oath to uphold and enforce the laws of the Great State of California, and the rights stated in the United States Constitution. I take my responsibility seriously, and I have always served with pride.

In the nine years of active law enforcement I have made several arrests of people who stray from the law and choose to unlawfully carry a firearm. Many of the suspects that we deal with on the street are already convicted felons, and are prohibited by law to possess firearms. I can tell you from years of experience, that these folks do not care about the laws that prohibit them from carrying. Most will not think twice before using those weapons to victimize people like you, especially if they know that you are unarmed and unable to defend yourself. And by us passing more gun restrictions, the bad guys WILL know for sure.

What makes you think that a single gun ban would change this? Why not make it easier for our law-abiding citizens to obtain a carry permit if they choose? Make it easier for them to legally possess a firearm on their person or in their homes, which would give them the ability to adequately protect themselves. We as a nation, have instead taken several steps backwards, and have made it absolutely harder to arm ourselves accordingly.

In most of the country, law-abiding citizens are able to carry firearms concealed. In Vermont, citizens can even carry without getting permission and, not surprisingly, Vermont has often been dubbed the Safest State in the nation. But in some states, officials make it very difficult for good people to obtain a permit to carry firearms. They also limit magazines capacities, require “bullet buttons” and have state-approved rosters which restrict the types of weapons we can legally own. I challenge you to give me the name of one crook who would take them time to “check the list” prior to using the gun of their choice while committing an act of violence.

I can also tell you from my training and experience, that we as police officers cannot provide the services that we should be able to. Most departments are understaffed and/or operate at minimum staffing levels because of budget cuts, and poor money management at the municipal level. This has created a “reactive police force” rather than a “proactive police force.”

Does that mean that we are not proactive as police officers? Of course not. We do what we can and act when we need to. However, we cannot be everywhere at once. Although we do what we can to get to an emergency
as quickly as possible, it is very likely the officers will arrive after the incident has taken place. God forbid you are ever faced with needing a weapon to defend yourself or a loved one. You will be wishing that you had the means to not only defend yourself, but to defend yourself properly against a person who will be better armed than you.

I have never met Nick Meli of Portland Oregon. However, I am sure he was glad to be armed on December 11, 2012. Nick, who was walking through the Clackamas Town Center mall with a friend, was able to draw his pistol and protect himself against a heavily-armed suspect who had just killed two other people in the mall. Mr. Meli was not a police officer, however, he had a CCW. He was able to take cover, draw his pistol, and point it at the gunman. When the gunman noticed Nick, he chose to end his own life rather than carry on his killing spree. It is my belief that Nick saved many others that day because he was afforded the right to carry.

In ending, I ask of you to not act out of fear. Do not have a “knee jerk” reaction in this. Do not take my right as a husband and as a father to protect m y family against sick individuals who choose to cause us harm. Do not place unfair limits on my ability to protect myself and my loved ones, and make us play on an uneven playing field. Do not take away my Second Amendment right that our forefathers set forth in the Constitution. A man or woman should have the right to protect themselves and their families. Our forefathers knew this then, and I know this now.

Thank you for your time.

Officer Rob Young is employed in the state of California. His testimony is provided courtesy of Gun Owners of America, 8001 Forbes Place, Suite 102, Springfield, VA, www.gunowners.org.

The answer is in a higher power than guns