Can You Carry Concealed AND Suppressed?

Can You Carry Concealed AND Suppressed? 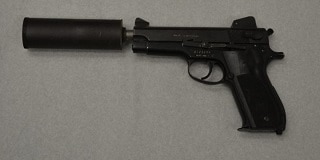 I remember when suppressors weren’t a common sight at the range. They were relegated to hyper-fictionalized movies about assassins and spies. Now, I think the common person is at least somewhat aware of the benefits of suppressed firearms. Suppressors reduce the recoil and damaging noise associated with shooting a gun.

For hunters, it means hearing that deer rustling in the low brush. For avid shooters, it means not having to wear bulky hearing protection. Heck, for family homeowners defending their homes with a suppressed handgun, it means not sacrificing their ear drums to save their families.

Whatever your reasons, suppressors are awesome at protecting hearing. Unfortunately, they’re still a pain in the tail to get. It’s not so much the supply — there’s plenty of that — as much as the BATF’s molasses-slow process for obtaining a tax stamp.

Because suppressors are regulated as if they’re firearms (which they aren’t), they are put through a process similar to what a person has to go through to get a short barreled rifle.

In a word: government bureaucracy at its finest.

And as government bureaucracy rarely lifts its icy, cold grip on the things it touches, it may be a long while before suppressors are rightfully sold as accessories.

Probably not as an everyday, inside the waistband concealed carry handgun.